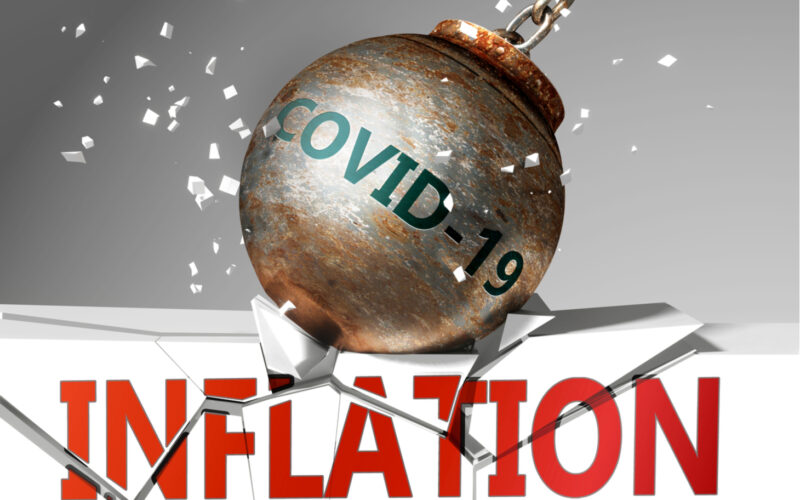 My pandemic rants are over, for now. But it’s not just on Covid-19 that the narratives are suddenly changing. It’s also on inflation. And, just as with Covid-19, the mainstream media has turned on its masters there too.

My friends Boaz Shoshan and John Butler have been covering some of the more scandalous dealings here at a Southbank Live. Boaz and John also delve into my own topic of today – soaring inflation. Be sure to check out their take on what’s going on before you hear mine. It was John who predicted this inflationary mess here in Fortune & Freedom just days before it took off, after all.

Indeed, inflation appears to be spiralling out of control. In the United States, it reached the fastest pace since 1982: 7%.

In Germany, inflation is at its highest since 1992, when reunification triggered a spike in prices that was met with the sort of tight monetary policy which earned the German central bank  – the Bundesbank – its formidable reputation. N.B. That is something that won’t be happening this time with the European Central Bank (ECB) in charge.

But there’s something more interesting going on than inflation rising to scary heights. As the Financial Times describes it:

A hidden battle is raging over inflation. Alongside the public fight over how to defuse the looming cost of living crisis, there is a guerrilla war going on about how UK inflation is measured and if that calculation can be changed retrospectively.

Governments love changing the way they measure things when they’ve been proven wrong. Consider this quote from Australia, which made me laugh for a good 30 minutes. It comes from Dominic Perrottet, the state premier of New South Wales (NSW):

We released modelling last week in relation to the health system here in NSW. Today we are releasing where we are tracking against that modelling and […] we are currently tracking better than the best case scenario we released last week.

Yes, having had its old modelling blown out of the water, instead of acknowledging Covid hospitalisations and deaths as a complete and unexpected failure, the government just updated the modelling. And the government only waited a week to announce that they were doing better than expected.

Back to inflation and the debate about how to measure it…

You see, the UK has three different measures of inflation. And when it comes to what they’re saying about prices, the FT tells us that “The range is massive” enough that, “If your pension was linked to [the highest measure], the rise would be 54 per cent more than if it was linked to the lowest. Yet the government’s latest plan is to do just that.”

I don’t want to focus on the UK though. I want to show you what has happened in the United States. Because it may tell you what happens here next.

The American inflation statistics can be split into all sorts of sub-sets too. And, recently the central bankers have been busy fudging the numbers more than ever under the guise of the pandemic.

One distinction the Federal Reserve makes is between “flexible” prices and “sticky” prices. The idea is that flexible prices move around a lot more, so they might fall again after jumping by an unusual amount. Thus, any short-term spike in flexible prices, but not sticky ones, is likely to reverse.

Of course, precisely the opposite logic works too. If inflation were about to surge out of control, flexible prices would move first, signalling more inflation to come in the sticky prices next. But governments don’t hire two-armed economists. Fortune & Freedom editors do have two arms though. And so we consider “on the one hand” as well as “on the other hand”.

Again, what has changed here, as with Covid-19, is that the mainstream media is waking up to what’s going on.

John Authors of Bloomberg began like this: “Many reasons were offered in mid-year, sincerely and honestly, to show that higher inflation numbers were merely a facet of transitory effects of the pandemic. None of them holds water any longer.”

But then things got even more snarky from that usually mild-mannered analyst:

The Bureau of Labor Statistics started to publish an index that excluded food, fuel, shelter and used cars and trucks — an odd mix to exclude — that captured most of the weirdest effects of the pandemic.

Unfortunately, inflation from that index continues to rise, and is now at a 30-year high:

We can’t publish the chart which followed, but you get the idea from its title and subheading.

In fact, Authers goes on to do a systematic takedown of the shifty adjustments which have been made to various inflation statistics, and how they are now showing inflation too.

The arguments based on adjusted data that suggested inflation was transitory now suggest the opposite.

And yet, monetary policy is not yet reversing course, except in the UK, with a piddling interest rate increase. The central bankers continue to promise tightening at some point in the future, but not yet.

This has allowed the inflation spike to reach dangerous levels. We are talking about levels where even tighter monetary policy will struggle to rein it in.

Not everyone in the media is willing to call the emperor naked though. Some commentators were caught trying to argue that inflation is good, good for the poor, bad for the rich, or should be allowed to “let rip” here in the UK.

This, quite frankly, is HILARIOUS given the response it’ll receive from those who read the comments and experience otherwise each day. I mean, the idea that someone would even try to argue… oh, never mind.

A series of polls in the US are already finding that inflation has become a bigger concern than the pandemic. And governments are getting the blame.

Now, when fudging the numbers doesn’t work any more, many public policy makers whose position has become untenable choose to resign. But over at the Federal Reserve, you have to be caught out doing some very dodgy stuff to retire.

Instead, when proven wrong, Federal Reserve policymakers retire words. That’s what Fed Chair Jerome Powell did back in December: “it’s probably a good time to retire that word [transitory]” he told the world.

To be clear, it’s his job to retire inflation…

Instead, he’s pumping it up with QE and low interest rates and then retiring words he used to mask the resulting inflation…

Following the Taylor Rule, a proposal to automate monetary policy based on inflation and GDP data, would have US interest rates at around 6%! That’s, well, substantially higher than today’s 0%…

But even that 6% is still below the rate of inflation in the United States. Monetary policy would still be loose by the measure that matters.

Another take on inflation focuses on jobs. Well, the four-week average weekly jobless claims hit its lowest since 1973. And monetary policy is at the loosest than it has ever been by some measures.

What more could central bankers possibly need to tighten? And why didn’t they months ago, instead of fudging data?

That’s what the media is asking now, at last.

All this focuses on consumer prices. But companies pass on costs, so producer prices matter too.

In fact, when we predicted inflation would become a problem early last year, it was producer price spikes that alerted us.

And CNBC now reports “Wholesale prices jump nearly 10% in 2021” in the United States. That’s also a record, but data only goes back to 2010. And it suggests that consumer prices will continue to rise.

But who will they vote for? Only more of the same is on the table from mainstream political parties.

Tomorrow, I will come to praise Caesar, not to bury him. I’ll ask the following question: what happens when central bankers tighten monetary policy to slow inflation caused by bottlenecks?

Hint: do you think that higher interest rates will solve a supply chain crisis?