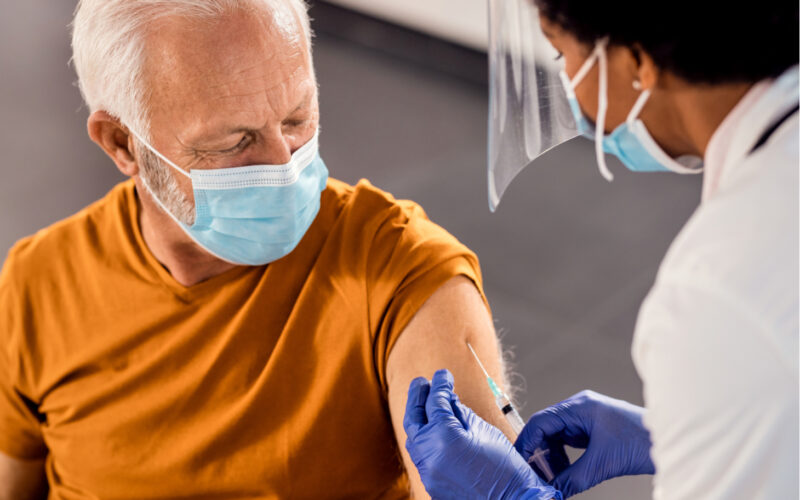 We’ve been told that vaccines are our ticket out of repeated Covid-19 lockdowns. That’s what the world is gambling on. Right now, financial markets are also betting that that is the case.

But what if they don’t? What if vaccines won’t unlock the globe?

At first glance, evidence from Israel – the leader in the vaccination race – is encouraging. Two doses of the Pfizer vaccines were found to be effective.

The trouble now is, what does effective really mean? Does it mean the end of lockdowns? Or do lockdowns continue into the future because vaccines don’t eradicate the illness, they just dampen it?

That debate is raging in the media now.

Meanwhile, I’m worried about events on a tiny island.

You see, we now have what you might call early evidence that the battle between Covid-19 and vaccines is not actually looking so good.

It’s far from convincing, complete or decisive proof of anything, yet. But it is concerning and worth keeping an eye on.

Israel may be Round 1 in the battle between Covid-19 and vaccines. But consider Round 2…

The nation with the highest per cent of vaccinations in the world is seeing a Covid-19 surge.

And the island nation in question is implementing lockdown-like restrictions. Schools have been closed and sporting events cancelled. That looks like being just the beginning…

I’m talking about the Seychelles. Last week, the country’s Covid-19 cases spiked, despite over 60% of the adult population having been vaccinated.

The rise is large too: 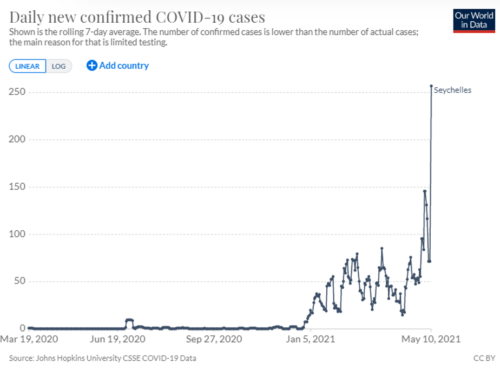 Source: Our World in Data

A third of the active cases involved people who had had two vaccine doses, the country’s news agency said.

The rest had either had a single dose or were unvaccinated.

Four fifths of cases are locals, the rest tourists. That means that this isn’t an entirely imported problem.

What should we make of all this, scientifically speaking? I’m not sure. Nor do I care to guess any more. The virus seems designed to humiliate anyone with an opinion about it.

Nevertheless, the severe threat that keeps me up at night is another wave of Covid-19 in a nation that has been vaccinated. Whatever “been vaccinated” actually means…

The mere threat of vaccines losing the battle, or just a few rounds, could bring back the worst of 2020.

Of course, hard numbers matter. The Seychelles is a very small sample size. A 62% rate is not a 100% rate. The vaccines that have been used are just two of the many available.

What will financial markets make of the news?

Consider this article as me getting on the record about the news from the Seychelles. I don’t plan to say “I told you so” if markets crash in coming months – if vaccines turn out to be less effective in reality than assumed in trials. Or if the limited effectiveness means continued lockdowns, quarantines and economic paralysis.

But at least you won’t be completely taken by surprise if all hell breaks loose as the recovery evaporates. Maybe they’ll call that outcome the Seychelles Financial Crisis?

If vaccines, which were supposed to save us and unlock the world, come with a load of ifs and buts, that may mean that lockdowns and quarantines continue. The precautionary nature of the measures we’ve had so far would be just as precautionary in continuing.

In my analysis for Australian readers of Jim Rickards’ newsletter, I’ve called it “Sakoku,” named after Japan’s 214-year isolation from the world in the 17th, 18th and 19th centuries. Nobody was allowed to leave or enter and trade was limited. I’m not going to tell you what my wife’s ancestors did to Christian missionaries found wandering their lands…

By the way, you can find out what Jim Rickards thinks of our Gold Summit here.

No doubt subscribers laughed at the idea of Australia being similar to Japan in Sakoku. That was until the recent drama which threatened Australians returning home from India with jail time and fines…

Cricketers were exempted eventually, of course.

The more relevant point is that all this has costs. Japan fell behind under Sakoku, as all nations do when they try to shut themselves off from the world. The world shutting itself off from… itself… also has costs. The eurozone’s double-dip recession after recent lockdowns shows that nicely.

But don’t get side-tracked by the back and forth in Europe. The real story that warns you about chaos to come could be the one that is unfolding in the Seychelles…