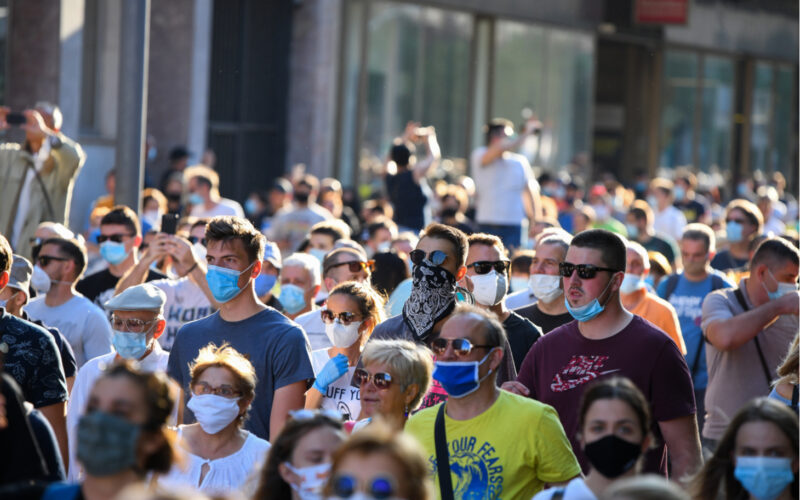 Last night, I had the strangest conversation with my parents-in-law. It was all about Covid, vaccines and lockdowns.

I’ve always known different nations’ news channels report the same news entirely differently. I follow the news from the UK, Germany, Australia and the United States each day. And they’ve offered completely different facts and “science” throughout the pandemic.

But, despite sharing the same house in small town Japan, it’s like my parents-in-law and I are living in an entirely different universe. The news they get, the facts they hear and the science they are told are… well, it’s the opposite to what I hear.

The topic that kicked off the conversation was the UK’s Freedom Day surge in Covid cases. The Japanese news apparently reported that cases in the UK are increasing dramatically.

Reuters, on 19 July, reported “England’s ‘freedom day’ marred by soaring cases and isolation chaos”. And hours before the reopening, Imperial College London epidemiologist Neil Ferguson told the BBC it was “almost inevitable” that cases would hit a record 100,000 within a week after the lifting of restrictions.

Instead, cases peaked two days later and began an impressive plunge that has continued since then.

That is almost certainly awkward.

But I am almost certain this is even more awkward: back on 9 July, the Mirror pointed out how the reverse had happened: “UK Covid cases have tripled since aborted Freedom Day with 10 days until rules scrapped”.

But… back to my odd conversation with my Japanese in-laws. You might think that the extraordinary events in the UK would get some airtime given how surprising they are. And they did get some coverage.

Only, the Japanese news focused on one particular number. You see, the total number of active cases in the UK is rising. Even as the number of new cases is plunging.

It takes time to recover from Covid. And, because of the spike which happened after the aborted Freedom Day, the total number of cases is still rising now. And that’s the statistic which the Japanese news reported on… the one that went up.

Of course, when reporting on cases in Japan, they use new cases… You see, there’s much consternation about the Olympics being held during a pandemic. And cases have exploded just in time for the event too.

Of course, the same goes for many nations not holding the Olympics. But it’s too good a correlation not to report on. Unlike the Freedom Day in the UK one…

My wife’s response is the point: “Don’t tell my parents,” she said. Why? I have no idea, but let’s hazard some guesses…

Perhaps because my parents-in-law were due to get their Pfizer vaccine in two days’ time. That was after a spectacular effort to book the appointment which involved every internet browsing capable gadget being requisitioned at 2pm once a week in order to join the race to book a spot.

Or perhaps my wife asked me to keep quiet about the study because it hadn’t featured on the Japanese news. And therefore, it must not be true, as far as Japanese people are concerned.

A few days later, with arms still sore, the Japanese news caught up with my parents-in-law… My mother in-law was the one who mistakenly mentioned what she’d heard on the news about Pfizer only being 39% effective in Israel, causing much consternation. None of which was directed my way. Which tells you a lot about my marriage and the Japanese art of harmonious relationships.

But the Israeli study is of course just one of many. You can pick and choose whichever one you like, as my father-in-law pointed out. And that is precisely the point I am trying to make. Because it works both ways. There is a study that shows high effectiveness, and there is one that shows low. In fact, the real point is the gap between them. Which tells you about the level of uncertainty inherent in the estimates.

Don’t you believe the science?

Which science is it today?

At this point, there seems to be so much science about that politicians can pick and choose to focus on whatever they like. They can choose to believe models which claim an “almost certain” increase to 100,000 cases a day if they don’t lock down, or they can choose not to.

And this is why we see such divergent policies between different nations. With no discernible connection between policy and result. Just look at Sydney versus Melbourne at the moment. Both have been locked down, but the results have diverged dramatically.

We moved on in the family discussion to whether or not young people should get the vaccine. I can’t figure out the answer. But I can tell you the incentives have rapidly shifted thanks to the recent studies about the effectiveness of vaccines over time.

You see, the vaccine has risks, just like Covid. The question is which is greater. That’s not knowable in the short term, and we know a lot more about the risks of Covid than the risk of vaccines because of how much data we have.

The determining variable was the idea that getting the vaccine would protect the vulnerable, not just the person who is vaccinated. It would reduce the spread of the virus, which has been the key issue given how dangerous it is to some people, but not to other people. Risking the vaccine made sense, to protect those who needed it. And so, my father-in-law explained he wanted young people to get the vaccine.

But, with cases surging in highly vaccinated places like Israel and Iceland, this particular part of the narrative is breaking down fast. If the vaccines don’t stop the spread, the persuasive idea of protecting others by getting the vaccine is weakened.

But, just as the world began to despair about the prospect of vaccines not ending lockdowns, along came the UK’s Freedom Day to confuse everyone all over again.

Except those who listen to the news. They think the UK is experiencing a post-Freedom Day Covid surge…

Speaking of surges, have you noticed this strange pattern in the stock market?