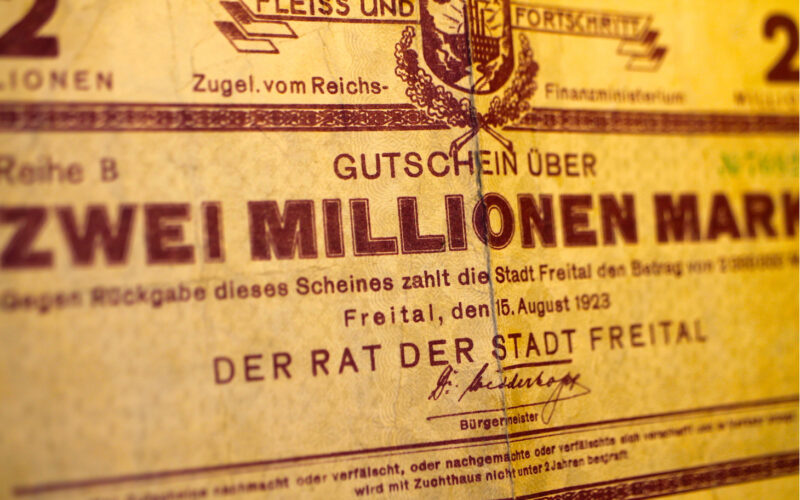 During the Weimar hyperinflation, people blamed all sorts of things and other people for the inflation they faced. Speculation, industrialists, farmers, the stock market, subsidies, profiteers, lost territory, foreign currencies rising in value, and Jews were top of the list.

The only thing people didn’t seem to blame was government deficits and the money printing which paid for them. But that’s another story.

More specifically, inflation in a nation is identifiable by the crashing value of its currency in foreign exchange markets: it is felt there by the nation’s importers, exporters and tourists, and the inflation is exacerbated by the exchange rate plunge.

In other words, inflation and foreign exchange drama are joined at the hip, historically and metaphorically speaking. But the inflation drama this time may be quite different to the usual inflation story. You see, our current inflationary pressures will be far more global than ever before. It will be more comparable to the widespread inflation of the 1970s than isolated cases of national inflation before that time or since.

But even the 1970s’ stagflation was focused on Western economies (and some more than others). A lot of the world was still living under communism. This time, the whole world may be in for a synchronised inflationary shock.

First, though, let’s take a look at just how important foreign exchange markets are in inflationary periods.

During inflationary periods, some people try to save in foreign currencies. These become the best way to preserve wealth in liquid form. You keep all of the advantages of money, but you escape its falling value.

When inflation gets bad enough, making the local money worthless, foreign currencies are not just the best way to save, but also to conduct business.

This is an odd reversal of Gresham’s Law – that people save and hold onto good forms of money, while spending less favourable money to get rid of it. Well, when the national money becomes entirely useless, some people end up reverting to foreign money. After all, some transactions must take place in the end…

Because people don’t trust government statistics, or are unable to obtain accurate information on prices because of government intervention, the exchange rate becomes the de-facto measure of inflation itself.

During the Austrian hyperinflation, people clamoured for news from the Swiss exchange rate markets. This was their de-facto inflation measure, and revealed the value of their savings, increasingly denominated in Swiss money.

Austrian housewife Frau Eisenmenger wrote this in her diary:

The Viennese handed a large bundle of kronen, still thinks he has grown richer, without taking into account the enormous rise in prices resulting from the Zurich quotations which come as a fresh surprise to him every day.

Twice a day we are all forced to await the quotation of the Zurich bourse. Every fresh drop in its value is followed by a wave of rising prices … The confidence of Austrian citizens in the currency administration of the State is shaken to its foundation.

Adam Fergusson, in his book When Money Dies, explained how deluded people were about this in Germany:

A few of the financially sophisticated could be heard blaming the government, and the Finance Minister in particular, but a typical view was that prices went up because the foreign exchange went up, that the exchange rate went up because of speculation on the Stock Exchange, and that this was obviously the fault of the Jews.

Although the price of the dollar was a matter for almost universal discussion, it still appeared to most Germans that the dollar was going up, not that the mark was falling; that the price of food and clothing was being forcibly increased daily, not that the value of money was permanently sinking as the flood of paper marks diluted the purchasing power of the number already in circulation.

It seems incredibly difficult for people to understand that the value of their money can fall without the number printed on it changing. They assume everything else in the world is changing, except the banknote’s value.

The Vossische Zeitung declared that:

At some point, foreign banknotes become so widely used that this really can be blamed for the worthlessness of the currency. In Austria, rioters demanded the government ban foreign currency use and confiscate it after many shops had begun dealing in foreign money only.

What madness could drive a nation to hyperinflation? That reasoning, too, can be found in foreign exchange markets. Fergusson’s book When Money Dies explained this, with my emphasis added:

Most successful businessmen, however, stuck happily to the heresy that only by a continually falling exchange rate could Germany compete in neutral markets. After them, the deluge. Neither they, nor the politicians, nor the bankers – with distressingly few exceptions – perceived any direct connection between inflation and depreciation. And yet, as the printing presses churned out bank notes the exchange continued rapidly to fall.

Remember the currency wars after the 2008 financial crisis? Nations would create money to try and devalue their currencies and gain a competitive advantage in exports. That’s what Germany was doing in the 1920s too.

And it worked. German unemployment was a tiny fraction of the UK’s, for example. German goods were in demand overseas because they were so cheap.

But it didn’t work in the lead up to the 2020s. This was because so many nations engaged in the same practice at the same time. Perhaps this suggests the nature of inflation has changed too.

Foreign exchange also allows international companies to shift their profits overseas into a foreign currency, as we already see companies do today. They call it transfer pricing.

By having many subsidiaries in many countries, all charging each other money for various goods and services, profits can be moved to the lowest tax jurisdiction. In an inflation, companies will likely ensure that their profits are earned in the nation without inflation, where the profit will actually be worth something.

This reduces tax revenue from profits in the nation with inflation and shifts wealth overseas, but it also has the effect of overinvestment in cost centres. Employment is high in inflationary countries, at first.

The trouble with the lessons from 1920s Weimar Germany and hyperinflationary Austria are that these two nations were unusual in their fate at the time. Germany had incredibly low unemployment but hyperinflation while the UK had the reverse, for example.

The same goes for the likes of Argentina and Zimbabwe more recently. They are textbook cases of hyperinflation, but fairly isolated globally.

This time, governments around the world are all resorting to hyperinflationary policies – vast deficits and money “printing” (i.e. actually creation by electronic means) – at the same time.

What happens when the whole world catches the inflation disease together?

The distinction is important because inflation would be less able to manifest itself in foreign exchange markets. Devaluations of currencies are apparent in how much foreign currency they will buy even before the loss of purchasing power of consumer goods is revealed. That’s why foreign exchange becomes such a hot topic in inflationary nations. And why governments interfere in them.

But this time, if all nations are engaging in inflationary policies at the same time… what happens?

Well, the inflation will be harder to diagnose. It also won’t emerge as fast by making foreign goods more expensive.

Another possibility is that we get inflation without the benefits. What I mean by that was evident in Weimar Germany. By many measures, the economy was absolutely booming. And many in the West believed this – it was one reason why they demanded Germany continue to pay reparations. It was believed the Germans were faking their economic misery to escape their Versailles Treaty commitments.

The biggest advantage is in exports. A worthless mark made German industry very competitive, internationally. This also helped wealthy German industrialists protect their wealth in overseas dealings by keeping profits out of Germany.

But if all nations engage in inflationary policies, then the currency war becomes like all wars – nobody wins. We’ll have inflation without the benefits. That outcome could well be what was seen in many Western countries in the 1970s: “stagflation”.

Perhaps that was what really set the 1970s apart. The inflation was too widespread to bring benefits.

To sum up, I think our future inflation may look very different thanks to the foreign exchange markets masking many of its effects.

But one similarity will remain the same. A stock market mania as speculation soars when people look for places to get rid of their cash.

My friend Sam Volkering, who introduced me to speculative manias like bitcoin, cannabis and tech stocks years before they really took off, has identified what he thinks the next mania will be. Find out what it is here.