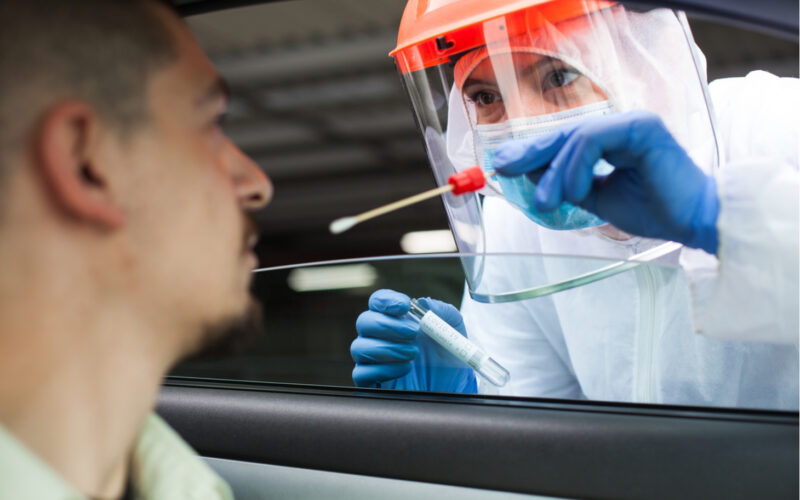 A few weeks ago, the New South Wales chief health officer, Dr Kerry Chant, uttered the words “new world order” in a press conference in Sydney. You can imagine what happened next on social media and conspiracy websites around the world…

In an attempt to piggyback off this poor choice of words, and its digital viral load, I’m going to use it here. But in the same innocent sense that Dr Chant meant it.

You see, I’m in a small Japanese town, surrounded by swaying rice fields, restaurants that never closed and lots of fully stocked petrol stations. The local police chase down traffic offenders on foot by waving and occasionally even shouting.

The Japanese constitution supposedly prevented any proper lockdowns, and so they were voluntary. At the height of the pandemic in Japan, I took my daughter to swimming lessons, the indoor playground and we went to trampoline lessons together.

If the Japanese air force base weren’t down the road, you’d swear that nothing could possibly be wrong with the world. The surge in mask wearing might lead you to conclude a particularly bad bout of the flu was doing the rounds this year, but Japanese people mask up all the time anyway.

The thing is, every day I’ve been here, I read the news from the UK, United States, Germany, Australia and sometimes Ireland and Austria. Those are the places I’ve lived in. And all hell seems to be breaking loose somewhere at any given moment.

A new world order is coming about, some might say.

The thing is, despite the pandemic supposedly receding, this phenomenon is actually getting worse, not better.

Sure, you probably care principally about the UK. And right now, the UK is back in the headlines over its energy crisis. But my point is that once you take a more global perspective, these crises are getting worse and more frequent.

Just over a year ago I was on a narrowboat holiday in Surrey. The multiple waves of Covid to come were just a theory.

We escaped to Japan in October 2020, just before the second lockdown in the UK.

Since then, almost all parts of the world have been through a series of crises. The crises have been punctuated by periods of calm, when people make the mistake of thinking it’s all over and that the world will get back to normal.

But this repetition is beginning to wear on people – that’s my message to you today. We’re having far too many crises. The veneer of civilisation is being stretched.

The battles over petrol are the symptom which is popping up in the UK. But the Australians in particular have completely lost the plot. Melbourne, winner of the Economist’s most liveable city in the world award in 2017, for the seventh time in a row, is on track to become the most locked-down city in the world – restricted for 267 days if lockdowns end as planned on 26 October. And that’s presuming lockdowns end when planned.

The result of this extraordinary effort? Record high cases of course…

Our distant colleagues at the Melbourne office… well, they haven’t been there much…

But here’s the relevant bit to my argument. The lockdowns just aren’t working any more. And not just in terms of suppressing the virus.

The entire city’s public transport system was simply stopped for a day to prevent protesters from getting into the city. But the protests were huge nevertheless.

Police violence and tactics have shifted to the totally surreal in response. I suspect this is because Australian police simply are not familiar with the sort of unrest that they’re experiencing now.

The French are doing their usual thing with protests, but more often than usual. The Romanians turned out in force. The United States is seeing a huge amount of mid-sized protests.

The thin veneer of civilisation isn’t just stretching, it appears to be breaking in many places. And this is happening as the pandemic is supposedly ending.

Of course, the guise of the crisis has frequently changed. The pandemic, the lockdowns, the stimulus and bailouts, the vaccinations, the vaccination passports, various forms of tracking, a pingdemic, the cost of living, austerity, petrol shortages, food shortages, and plenty more – they’re all controversial in some way. Each topic has its sign-carrying interest group willing to hit the streets during a pandemic.

If I recall correctly, Gloom Boom & Doom editor Marc Faber recently wrote or spoke about how he had been studying revolutions. It seemed to him that people are willing to put up with just about anything except food shortages or price spikes in food. That’s when all hell breaks loose. The Arab Spring is of course one example of this. And “let them eat cake”…

Well, we’re at that stage now, thanks to inflation in consumer and producer goods, and supply chain disruption…

Will those struggling to put food on the table join the protests next?

The narrative we’ve been fed over why all this is happening has changed gradually over time. As have many narratives during the pandemic…

So, my question today is: what if this mess is not a symptom of the pandemic, but part of the new normal?

What if costs are rising because of sustained inflation? What if the economy doesn’t inherently bounce back after all the changes that have been made during the pandemic? What if the supply chain disruption is part of dealing with Covid indefinitely?

The reason why central planning doesn’t work is because it is simply impossible for a central authority to coordinate something as complex as an economy.

Well, during the pandemic, we’ve had something mighty similar to central planning. Governments stepped in to decide which businesses were essential and which weren’t, for example.

We got the usual chaos. One minute, all restaurants had to close; the next minute, we were subsidised to go to them.

One minute, travel was illegal – the next, it was subsidised.

Sure, it’s a good idea to shut down HGV licensing centres to prevent the spread of Covid. But is it worth the subsequent threat of food shortages?

These sorts of debacles are exactly what you’d expect when the government is in charge of what gets produced where, by whom and for whom.

The idea that somebody was being shafted by the lockdowns went missing in the debate over cash handouts and the benefits of working from home. But it turns out that we need the people we never think of or acknowledge in order for our economy to function. The list of such people is long and includes entrepreneurs, the managers, the logistics companies, the investors with capital to fund ventures, and yes, the lorry drivers.

Do you think these people will return to business, set up and get going in coming months? Or do you think they don’t see the risks as being worth it? These matters are particularly important when the government can arbitrarily shut you down as a precaution…

Anyway, if some semblance of normality is still far away, or the new world order is unacceptable to the masses, we could be in for some extraordinary protests.

The protests are growing fast already, of course. The anti-vaxers, the anti-vaccine passporters, the anti-lockdowners, those protesting shortages, inflation, pension cuts…

What’ll be the issue that gets you into the street ? Perhaps it will be the lack of healthcare given the vast waiting lists? Or the tax hikes and pension cuts? Possibly inflation running out of control?

Consider this: isn’t it ironic that, just when governments discover that their budgets are limitless, they also discover they are unable to provide the basics like food, fuel and warmth?

Well, the electorate expects them to have the answers now… They want it to rain petrol, gas and chickens, not just cash.

But not everyone is falling for the magic money tree. And not everyone wants to spend their time out protesting on the streets. Some of us seek solutions instead of problems. And they are being proactive about escaping this debacle in favour of a world the government does not yet control. If you expect this mess to get worse, you need to see this.

PS Keep an eye out on Friday for our live broadcast on YouTube on the UK’s energy crisis: Southbank Live Episode #14 tomorrow at noon will feature James Allen, our in-house energy expert on what the chaos means for investors. We’ll send you a link right before we get started – in the meantime, be sure to check out last week’s episode with John Butler here.