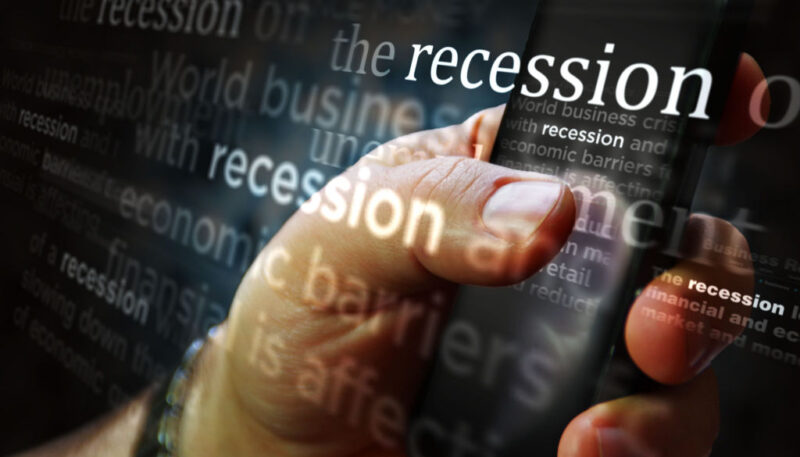 Economies don’t grow in straight lines. We have a business cycle of booms and busts. People used to refer to the busts as panics, until this became politically incorrect. So they began calling them by the more gentle term “depression” instead. Until the language police deemed this too terrifying too. And so now we have recessions, not depressions…

In 1978, the head of the US government’s inflation fighting task force referred to a depression as a “banana” instead in order to avoid being scolded by the president for using the “D” word. But it’s not just the word itself that has changed. The definition is just as hard to pin down.

What is a recession?

The recent heated debate in the United States about the definition of a recession should tell you that there’s no clear-cut answer. Even those called upon by the US government to declare when a recession occurs are a bit vague about it. And it can take them a whole year to make up their minds about when a recession began.

Because of all this vagueness, the rule of thumb for defining a recession has been two quarters of declining GDP. That definition has worked well for much of the past 80 years, with very few exceptions. But it is only a rule of thumb.

For example, the US economy shrank for two consecutive quarters between January 2022 and July 2022, but other economic data, such as employment, remained robust. Because of this, the National Bureau of Economic Research, which is an independent and private institution, may or may not declare a recession.

Are we in a recession now in the UK?

In the UK, the definition of a recession is two quarters of declining GDP. The UK’s GDP results for the first quarters of 2022 were not negative. However, GDP did fall 0.1% in the second quarter. So a recession may have begun already.

Either way, the Bank of England is anticipating a prolonged and moderate recession to begin in 2022.

How long will our recession last?

GDP is expected to decline in the fourth quarter and to continue declining in 2023. This is as prolonged as the recession triggered by the 2008 crisis – or, in other words, an unusually long one.

Our incoming recession may be unusually long because of central banks’ attempts to rein in inflation. They are raising interest rates despite declining GDP, which is a very unusual situation. Central banks and governments usually try and drag an economy out of recession by doing things to lower interest rates: they generally do not increase interest rates.

What does a recession mean for investors?

Market historian Russell Napier often points out that: “We have 122 years of data now that suggests there is no relationship between the return on equities and GDP growth”. Nevertheless, recessions are likely to feature bear markets for stocks. Recessions are  usually good for government and other high-quality bonds and bad for most other investments.

The reasons are obvious: profits fall as the economy goes into reverse; there’s less demand for investments; and this happens as people earn less and people want to take less risk.

Recessions are, however, are often buying opportunities. And investors need those in order to make larger profits.

What’s recession proof in the UK?

Recession proofing depends on the type of the recession. Our incoming one is unusual in that policymakers are encouraging it in order to bring down inflation. However, there are still some good options.

People need to eat, heat their homes and pay their car insurance. So, some forms of spending are very robust to recessions. Investing in the companies that produce and sell such products is one way to reduce the impact of a recession.

2. Dividend income, no matter what

Proven dividend-paying companies that are not exposed to the recession are a good way to sit out the crisis. They will try to maintain their payouts in order to maintain the reputation as a reliable income source.

Recessions tend to trigger a policy response from central banks and governments. The gold price usually benefits from this intervention.

Bonds have a reputation for being stable investments that (usually) offer a reliable and fixed income. If they are issued by a government or highly rated organisation, they are normally seen as being secure: if a recession leads to a sell-off in stock markets, bonds may benefit from a flight to quality. There is a significant risk if the recession is accompanied by inflation: in that instance, bonds will likely fall in price. Bonds that have a long duration (meaning that maturity and many of the interest payments are decades away in the future) are particularly vulnerable at a time of inflation: their prices may fall drastically even if the issuer has a very good credit rating.

The fortunes of some (usually) high-risk companies do not depend on what is happening in much of the economy. For example, a biotech company’s discovery of a new miracle drug is not impacted by a recession. A resource exploration company’s returns are far more impacted by what they find than the market price for it.

Exposing yourself to risks that are not impacted by a financial downturn can make your overall portfolio more robust.

What you can do to profit in a recession

Fortune & Freedom was created by Nigel Farage to help people like you understand and navigate from things like recessions. We’ve focused on inflation, the euro area debt crisis, the energy crisis and plenty more in the past few years. And our readers have become much more savvy as a result.

PS Nigel’s nervous. He’s getting a nasty case of deja vu. He remembers a time when the rubbish piled high, the lights went out and savers saw their next eggs evaporate. And he’s looked back into history and found three lessons that show things could become far worse before they get better. As a precaution, he’d like to share his thoughts with you HERE.