Do you remember what comes after a housing bubble bursts? 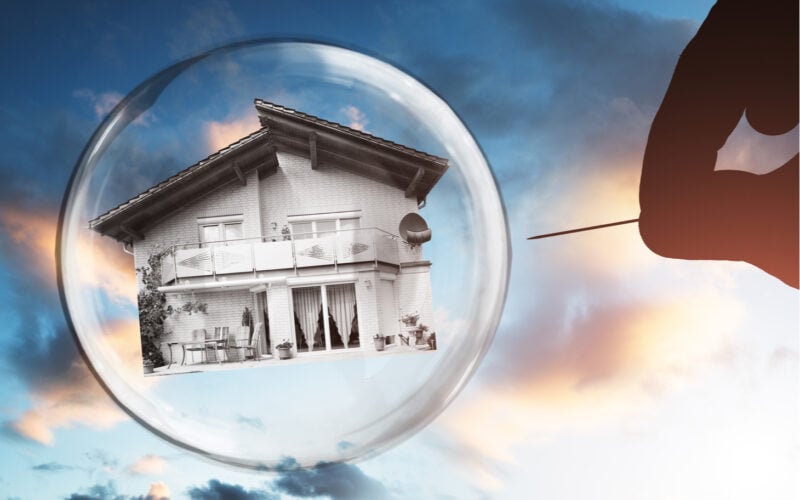 It didn’t take long for the world to forget the price of the housing bubble of 2007. Nor the lessons we were taught by what followed. Do you remember what comes after house prices boom? Or do you just care about getting richer as the value price of your house surges?

If we did remember what follows a housing bubble, we’d likely be in a state of panic right now, because house prices are spiralling out of control once again.

And, “Halifax says average selling price rose by almost £22,000 year on year in May.”

Are you excited about getting rich, homeowners? Or do you fear the consequences of such a boom? And what follows…

What about the housing market that triggered the chaos in 2007?

Financial Times: “US home prices rise at fastest pace in more than 30 years”. And the Wall Street Journal: “U.S. Home-Price Growth Rose to Record in April”.

The Case-Shiller National Home Price Index rose by a record amount of 14.59% year over year in April – the highest on record, just beating the September 2005 figure.

Those who ignore history are of course…

What about Ireland – the other posterchild of property price excess last time around?

Do you remember what happened next?

Let’s zoom out a bit. Does the global property boom amount to [another] housing bubble?

Yes, it does, in my view. But that’s not to say it won’t continue for some time yet. Still, the result is almost always the same. A horrific bust, at some point.

But perhaps this time is different? Well, in some ways it is. Even the central bankers are worried about a housing bubble this time around, after being caught out in 2007: “US cannot afford housing market ‘boom and bust’, warns Fed official” in the Financial Times.

Indeed, it can’t. A financial crisis now would be devastating.

So why are central bankers inflating another housing bubble with their low interest rates and QE?

The interesting thing about the comments from the Federal Reserve’s Eric Rosengren is that he connects loose monetary policy with house prices, however tentatively:

The comments were made with inflation at 5%, but they are referring to inflation still being too low and therefore needing very low interest rates…

But it’s the acknowledgement that this is connected to house prices surging out of control, which implies a bust at some point, which is most interesting. Low interest rates push up house prices by making debt cheap. Something that central bankers missed in the early 2000s, or denied.

At the heart of all this is the mistake central bankers make by focusing so much on consumer prices, even as the price of everything else spirals out of control.

In their world, as long as consumer price inflation, as defined by them, is near 2%, their policy is spot on. Even if their actions are fuelling a housing bubble, that’s the elephant in the room which nobody mentions. Or used to mention, now that Rosengren has implied it. He’s also not alone, with two other Federal Reserve presidents echoing the comments in the Financial Times article.

Where were these warnings in 2005?

More than five million people became millionaires across the world in 2020 despite economic damage from the Covid-19 pandemic.

While many poor people became poorer, the number of millionaires increased by 5.2 million to 56.1 million globally, Credit Suisse research found.

In 2020, more than 1% of adults worldwide were millionaires for the first time.

Wealth creation appeared to be “completely detached” from the economic woes of the pandemic, the researchers said.

Lower interest rates and government support programmes had led to “a huge transfer” of wealth from the public sector to the household sector, they added.

So it was central banks and governments who drove this transfer of wealth? Is that their job? Make millionaires out of property owners?

In Australia, the connection between central bank interest rates and house prices is especially obvious. Owner-occupied mortgage debt is at record highs, but the ratio of interest payments as a share of household disposable income fell to a 21-year low thanks to record low interest rates.

It is cheaper than ever to borrow and buy a house, despite record debt and absurd house prices. Of course, there’s a causal relation. When debt is cheap, people borrow more and this bids up house prices. It’s a classic case of unintended consequences. More on that tomorrow.

Some central bankers who actually acknowledge the problem, as well as the fact that they are part of the cause, are wondering whether it’s time to stop inflating housing bubbles. Newsmax has the key quote:

“Right now the housing market is on fire. They don’t need any other unnecessary support so I would be all in favor of that,” Waller said.

The trouble is, withdrawing support can trigger a bust. That’s how things go, historically. Central bankers inflate bubbles, burst them by raising interest rates and then we get a recession or crisis. And so they lower rates again, fuelling the next bubble.

For now, central bankers are still pouring fuel on to the fire with their low interest rates and QE. So the boom can continue.

Will they get the blame if the bubbles they’ve created go bust?

I doubt it. We’ll be sure to blame bankers, capitalism, deregulation and derivatives instead.