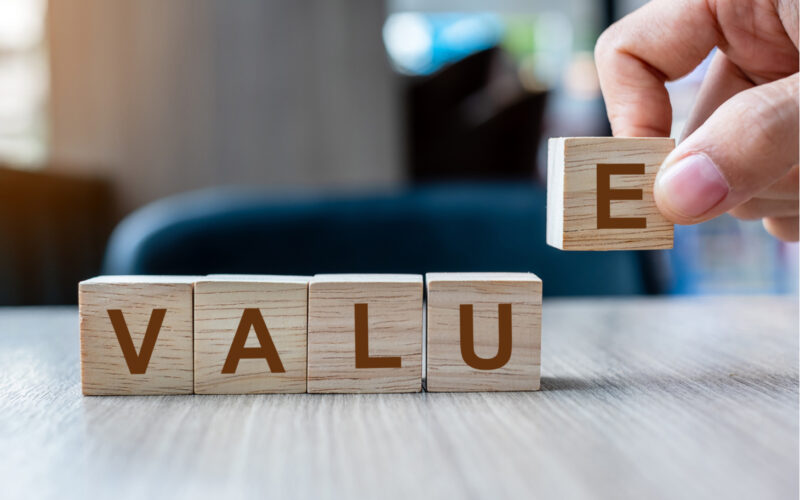 When you go shopping, do you like to overpay? Or do you prefer a bargain?

When you go on holiday (when that’s allowed), do you fly on the airline with the highest ticket prices? Or do you look for the best price out there?

If you’ve bought a home in the past, did you pay the full asking price? Or did you negotiate hard for a discount?

I think it’s pretty obvious. Most people don’t like to get ripped off. They’ll look for the best price they can get for whatever they want to buy.

The same basic principle applies to investing. Whether you’re buying socks or stocks, it’s best to pick them up when you can get an attractive price.

This general approach to investment is often known as “value investing”. It can be applied to anything in the stock markets, from mature companies that pay a high dividend income to investors, to high-growth companies, to country index funds.

Different investors in stock markets follow different approaches. But value investing is one of the most reliable ways to make strong returns over time. I believe that’s especially true for private investors, who don’t have the time or inclination to watch markets all day long.

Both the historical record and simple logic support this view.

The “father of value investing”

Who came up with value investing, and how do we know it works? Well, there are a couple of big names that all value investors know.

Benjamin Graham was an American investor that’s come to be known as “the father of value investing”. He wrote a book called The Intelligent Investor. It was first published in 1949 and is still revered today by many investors (including me).

Graham introduced the idea of the “margin of safety”. The basic principle is to look for stocks where the intrinsic value (which can be estimated and is fairly stable) is much higher than the current market price (which changes frequently, and often substantially).

He’s quoted as saying this: “In the short run, the market is a voting machine, but in the long run, it is a weighing machine.”

What he meant is that market prices can get out of whack from time to time, due to market sentiment and emotions. Sometimes they are far too high, and other times far too low.

But that underlying company fundamentals – true value – will win out in the end and be reflected in market prices. Bargain prices are great buying opportunities.

So how do you put that into practice?

In short: buy well and wait.

If you follow this approach consistently, the profits will roll in.

Graham was also a mentor to the famous investor Warren Buffett. He’s the chairman & CEO of Berkshire Hathaway, an American investment conglomerate. Buffett is known as “the sage of Omaha” in investment circles, a reflection of the huge respect that he’s earned.

Nowadays, he’s a multi-billionaire with wealth of around $88.5 billion. He got there by following Graham’s value investing principles, consistently and for decades.

Under Buffett’s guidance, Berkshire Hathaway made an average return for investors, including himself, of 20.3% a year between 1965 and 2019. That compares to 10% a year for investors in the S&P 500 index of large US stocks over the same 55-year period.

In other words, by applying a value approach, Buffett made an average annual return of double the main US stock market index. What’s more, due to the power of compounding (profits on profits), this would have turned an original investment of $100 in 1965 into more than $2.7 million by the end of 2019.

By comparison, $100 invested into the S&P 500 index turned into just under $20,000. A paltry sum by comparison. Buffett’s superb performance shows the power of value investing (and compounding) in action.

(Few people understand compounding properly. But it’s an essential concept in investing. If you haven’t seen it yet, or would like a refresher, I recommend you read the article I wrote on 23 December: The most powerful force in investing.)

Why does value investing work so well?

Let’s step back a minute and reminds ourselves of how investors profit from stocks. The profits come from two sources:

Dividends are paid out of a company’s cash profits. They’re set according to the company dividend policy, and can be paid quarterly, semi-annually, or once a year. It just depends.

Generally speaking, at least for financially sound companies, dividends should grow over time. That’s as company profits grow, and there’s more cash available to pay out.

Retirees like dividends because they provide an income to live on. Other investors, that don’t need to spend the cash immediately, should reinvest the dividends in more shares. As the number of shares increases, so will the total dividend income received each year.

Capital gains come from share price rises. Of course, share prices can also fall for various reasons. But, for solid companies with rising profits and net assets, their share prices will rise over the long run. That’s Benjamin Graham’s “weighing machine” in action.

Investors in shares therefore get a growing stream of dividend income paid to them, plus the rising value of the shares they own. Naturally, not every investment works out that way, especially in the short term. But, across a well-diversified portfolio, patient investors in shares will make highly attractive profits over time.

So where does value investing come in? Well, this is a way to turbocharge the capital gains. It’s also a way to increase the dividend income for a time, as a percentage of the amount invested.

Investment analysts use a range of techniques and financial ratios to assess shares. The most commonly known one is the price-to-earnings ratio, or P/E. The P/E is the share price divided by the earnings-per-share (EPS). The EPS is just a company’s post-tax profit divided by the number of shares issued to shareholders.

If the P/E doesn’t change in future, the share price should rise by 5% a year, in line with profit growth. Assuming dividends grow at the same rate as profits, we now have an expectation for total investor returns. They should be 9% a year, being the 4% dividend yield added to 5% price appreciation (as profits grow).

But what happens if the share price happens to trade at a much lower £5.00 instead? A value investor might take a close look at the company and conclude that the shares were still worth £7.50. In other words, the intrinsic value would be well above current market price, to the tune of +50%. That gap is the “margin of safety” that I mentioned above.

If the shares were bought at the bargain price, the investor hopes to reap that extra +50% gain over time. It’s never possible to know how long that might take. But, in my experience, it’s usually between nine months and a few years, but sometimes longer.

That’s potential profit boost number one that comes from the value investing approach. But there’s another, more subtle factor that many people miss.

This means that even if the P/E ratio doesn’t increase in future, as hoped, the total profits are still increased. Adding 6% dividend yield to 5% growth comes to 11% a year, at a fixed P/E of 10. That’s a whole 2% a year more than if the shares were priced at £7.50 when bought.

I know that’s quite a bit of number crunching. But I hope it’s shown you how value investing can turbocharge investments in stocks.

It significantly increases the likely future price gains, and also boosts the dividend yield on the invested capital. Both Benjamin Graham and Warren Buffett certainly prospered from this approach, applied consistently.

If you’d like to find out more about just that kind of opportunity in the stock market, then I encourage you to find out about UK Independent Wealth. Our aim is to help people to take back control of their money, so they can put it to work.

A large part of that is to identify shares that I believe have a strong combination of future growth and dividend income prospects. And I always have an eye on getting good value when it’s available. I also invest my own money into my recommendations.

Does that sound interesting to you? If so, you can find out more here.