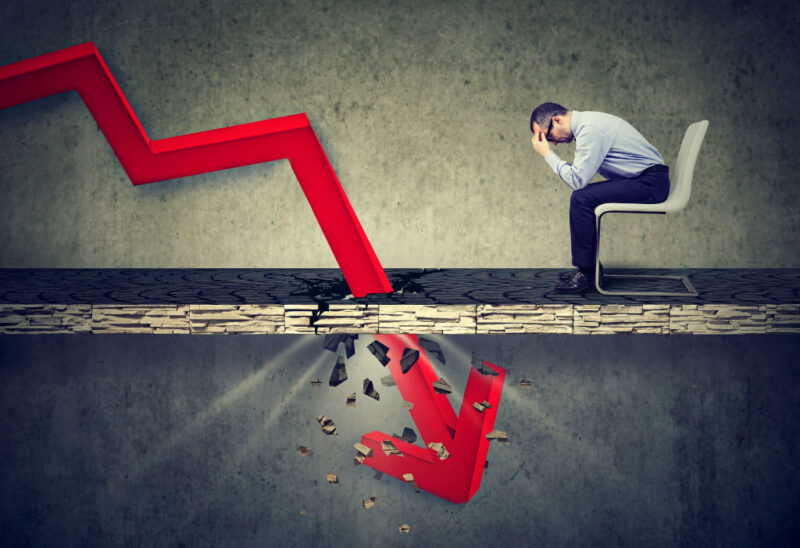 In the September edition of The Fleet Street Letter Monthly Alert, sent to subscribers at the start of the month, I warned of the “Witching Season”: the very real phenomenon that, historically speaking, a highly disproportionate portion of major stock market corrections, crashes and even financial crises tend to take place in the months August-November.

Many people are sceptical about this simple statistic. But, as the pirate captain Barbossa explains in the film Pirates of the Caribbean, “You best start believing in ghost stories, Miss Turner… you’re in one!” Investors had better start believing in the Witching Season… they’re in one!

There are numerous examples of the Witching Season playing out historically, including the October 1929 US stock market crash and, more recently, the global financial crisis of 2008. Could history be about to repeat, or at least rhyme?

In my opinion, for reasons specific to this coming winter, the risks are strongly tilted in that direction. Let’s take a look at which snowflakes might trigger the avalanche.

Global leading indicators are turning down, hard. The United States is already technically in recession, and China may not be far behind. Corporate profit margins the world over are under downwards pressure from a toxic mix of rising input costs and tepid final demand.

In Europe, I would beware of even higher inflation in the short term, especially when it is largely energy- and food-driven, and when it serves the geopolitical interests of one of the most ruthless, although effective, governments in the world today: Russia.

For obvious geopolitical reasons, Russia has strong motivation to make Europe’s winter a frozen hell this year. While that may sound contradictory, I think it describes the situation rather well. Russia needs export revenue for sure, but what it is losing in gas export revenue to Europe it is gaining back from elevated crude oil and gas prices and exports to China, India and others who are not participating in NATO-led Russian sanctions.

Moreover, Russian culture is, well, Russian. They take pride in their legendary ability to survive through frozen winters and the worst that history has thrown at them through the centuries, whether it be invasions from abroad or tyrannical misrule at home.

Contrast the situation in Russia with that in Germany, where the government is on the verge of collapse. Yes, ostensibly this is due to accusations of corruption by Chancellor Scholz, but were things going rather well economically, rather than worse than in the entire history of the Federal Republic, politically things might be playing out rather differently. Germany is collapsing into an inflationary recession which has already erased Germany’s trade surplus. Deutschland AG – encompassing several massive manufacturing and financial companies plus the Mittelstand (i.e. supposedly middle-sized exporters of advanced industrial products, which are actually quite big companies by most standards) firms – is suddenly unprofitable.

Given its heavy reliance on Germany, the entire EU is in serious trouble. If Germany can’t operate at a profit, it can’t subsidise the weaker members of the EU. This includes Italy, which has recently fallen into one of its perennial government crises yet again.

Among the leading candidates to form a new ruling coalition is Ms Giorgia Meloni, leader of Brothers of Italy, who is pushing a nationalist message: the message is not unlike that of her French counterpart Marine Le Pen, who recently won a record number of seats in the National Assembly. Should Ms Meloni succeed in forming a government, it would almost certainly be the most anti-EU Italian government in history.

Regardless of who one chooses to blame for the current conflict in Ukraine, investors need to take a sober look at the above factors. One side in this conflict has the goods. The other needs them, and at a price it can afford. The most powerful, prosperous government in the EU is about to collapse: this is due to a combination of an unusually weak ruling coalition combined with historically challenging economic circumstances. And the government of the country with the largest public debt – Italy – has already collapsed at a time that nationalism is on the rise.

Nationalism is the potentially mortal arch-enemy of the EU and, by implication, the European Central Bank (ECB) and the euro currency itself. If Italy, the third-largest member of the EU, joins the top two in a nationalist assault on the ECB it makes the demise of the euro become all the more likely, and all the more urgent as a  concern.

Having already gravely wounded itself with arguably counterproductive economic sanctions, the EU now faces the prospect of Russia twisting the knife in even deeper as we approach the winter months. And while the UK may have left the EU, there is no denying that its energy and general economic infrastructure is deeply intertwined with that of the continent. The UK’s political stability is also at risk from soaring fuel and food prices. Investors should take note.

Witching Season worries being what they are, for those who have yet to get seriously defensive in their portfolios, now is the time. Indeed, while my advice all year has been to not try to time the market, but to be invested defensively, avoid intangible assets and “invest low on the value chain”, now is one of those rare times when I’m tempted to flee out of the market and into cash, at least temporarily.

If one does exit the market, rather than merely get defensive as I have been recommending, just understand that, with inflation around 10%, you’re effectively locking in a 4%+ loss in real terms by sitting in cash for the remainder of the year. And the longer you stay on the sidelines, the larger that real loss will be.

Imagine the market bounces up and down for the next two years as inflation fluctuates around, say, 5-10%. Sitting in cash in that environment will cost you up to 20% in real terms. Sitting in bonds could well be worse, especially if inflation expectations creep higher.

Hence, for those who do wish to exit the stock market as we enter the Witching Season, I’d consider exiting into gold instead.

Some readers might object that a gold allocation is “defensive”. After all, stock market corrections are frequently associated with declines in precious metals prices too.

But gold is normally less volatile than the stock market. And while there is a small correlation between the two, in major stock market corrections or crashes, gold tends to stabilise and recover first, leading the way out, as markets prepare for some eventual easing of liquidity conditions.

2008 is a classic case in point. As we entered the Witching Season that year, gold declined along with stocks. However, following the November 2008 Lehman bankruptcy and widespread speculation that, at some point, central banks and government authorities were likely to intervene in the markets in various ways, gold began to climb again.

Gold went on to rally sharply for months before the stock market found a floor in March the next year. By that time, however, gold had regained all its prior losses, and it continued to rally thereafter.

The fact is that, notwithstanding gold’s tendency to be caught up temporarily in a general stock market correction or crash, there is not a meaningful correlation of gold to stocks over the longer term. When times are as they are today, with stock markets historically overvalued; debt and leverage ratios elevated; stagflationary forces evident; and geopolitical developments possibly making a dreadful macroeconomic situation even worse, one can justify an unusually large allocation to gold. As indeed I do.