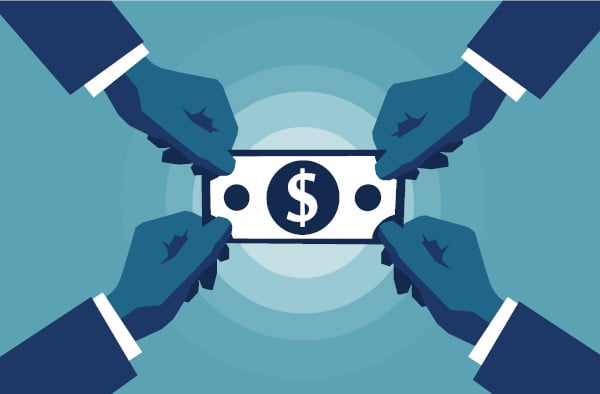 What is a stock buyback?

What should companies do with their profits? Reinvest them in order to grow their operations and, thereby, future profits? Or pay them out to shareholders in the form of dividends? Executives are now increasingly turning to a third option – stock buybacks.

Instead of paying out cash dividends to shareholders, a buyback is when a company uses the money it makes to buy its own shares on the open market.

Because the purchase takes place this way, nobody is forced to sell their shares. It’s just that the company joins those doing the bidding to buy on the market.

Once the shares are purchased by the company, they are extinguished, meaning they cease to exist. This reduces the number of shares in the company.

But why do this?

What do stock buybacks do to the stock price?

Stock buybacks mean the company’s remaining shares are worth more, which should mean that their price rises on the open market.

Of course, the buyback is not the only thing happening on any given day. So the effect is not necessarily observable. And stock buybacks are usually carried out gradually, over a long period of time, hiding when, precisely, the effect takes place. But it is still inherently true that buybacks make each remaining share more valuable.

Why? The effect of a buyback is to reduce the number of shares in the company, increasing the value of each as it now represents a slightly larger portion of the capital. If you divide a pie into fewer pieces, then each slice will be a little bigger.

Imagine a company with 100 shares, worth £100 on the market thanks to a share price of £1. If the company buys back 5% of its shares, 95 shares will remain. Each of these now represents 0.53% more of the company, and is therefore it 5.3% more valuable.

In monetary terms, the company is still worth £100 overall – that hasn’t changed. Because the £100 in total company value is now distributed between 95 shares instead of 100, each share’s value has increased by a gain of 5.3p.

Why do companies choose stock buybacks over dividends?

The effect of choosing a stock buyback over a dividend is to turn a cash payment into a capital gain. There are several possible reasons why this makes sense… depending on who you ask.

Because executives are often compensated based on share prices, capital gains can be more beneficial to them than dividend payments. A rising share price looks good, and makes those speculating on the price of the shares richer.

Because capital gains can be treated preferentially under tax law, investors sometimes get to keep more of their money. Furthermore, dividends are taxable upon payment. Capital gains are only taxable when investors sell out. Buybacks give investors a choice on when they want to pay taxes, whereas dividends don’t.

Are stock buybacks a good thing?

This is a matter of debate. And the answer probably depends on the situation of the investor and the company. For example, the tax efficiency can tip the balance in favour of buybacks for some investors, but not others. It depends on their personal situation. Retirees with low income probably prefer dividends, while other investors prefer capital gains.

Buybacks might make good sense, but they can also be manipulative and misleading. For example, when you see a company’s rising share price, you might presume it’s becoming more valuable. But the effect might be from stock buybacks, with the company’s total value not rising.

This illusion can have many effects beyond triggering higher executive compensation, which, as mentioned above, is often based on the share price. Market indices can also be goosed by what’s effectively a rising share price but not a rising company value.

There is one clear example of a good buyback. If a company’s shares are trading below their intrinsic value, it makes sense for the company to buy them. In other words, if the share price is trading below its value (whatever that is), then buying back shares benefits the other investors by giving them outsized gains when the share price begins to reflect this value.

What you should do during a stock buyback?

If a company announces that it plans to buy back shares, you don’t need to do anything. Even if you decide to sell your shares, and the company happens to be the one that buys them, you probably won’t even notice.

Just beware that subsequent capital gains might be misleading. And be sure to check whether a company’s total value (market capitalisation) is going up, and not just its share price due to stock buybacks.

Want to keep up to date with the market? Your best bet is to remain informed. Our Fortune & Freedom newsletter is free of charge and keeps abreast of changes in the market including stock buybacks.

If you’re not already subscribed, enter your email address in the sidebar at the top of the page and click on Subscribe now!