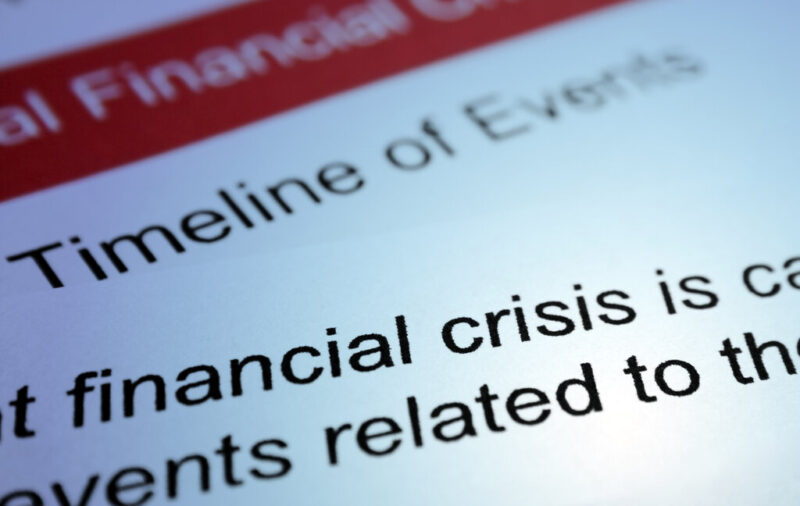 The recovery is on! The economy is going to boom now that the Covid-19 pandemic is behind us!

Perhaps. But I doubt it’ll be that smooth.

As I see it, our economy has been in similar situations to that of today twice before. Well, the two World Wars are the only examples I can think of in modern history. The US and European housing bubbles in 2006 may not be far behind though.

And yet, economists and investors don’t even pay attention to the most important feature of where we are today, economically speaking: the vast misallocation of capital in our economy.

But what does that even mean?

The answer to those questions turned out to be “no” after 2007. And yet, those things did happen. So, the question is why the mistake was made and why it wasn’t identified as such before the crisis.

Most people will point to corruption, short-term incentives, regulation, moral hazard and all sorts of other misaligned incentives. And they’d be right, in hindsight.

But this only exposes the preceding presumption that the investments of capital and economic activity which were happening in the build-up to 2008 were presumed to be a good thing, merely because they were happening. If it didn’t make sense, it wouldn’t be happening, was the argument at the time.

You see, economists do not distinguish between good and bad economic activity. They just (try to) count the amount of it. As John Maynard Keynes famously explained, it’d be a good idea to get the unemployed to dig holes and fill them back up, because this would raise GDP. He didn’t ponder the value of that GDP.

At least developers had the temerity to build real houses in Ireland and Spain, even if nobody would ever want to live in them. I suppose they might as well have been filled-in holes in the end.

But what if we bring a qualitative judgement into the consideration? What if we acknowledge from the outset that some economic activity doesn’t make sense? And that some investments of capital are misguided.

This is obviously the case, of course. Some businesses always fail. Entrepreneurialism is largely a matter of trial and error. Of the small or start-up companies I’m a little familiar with, very few end up being successful in the line of business they set out to pursue from the start. They usually find something else more promising along the way and become successful that way.

But what I’m talking about here is a large-scale misallocation of capital. A systemic one. Or even a reorganisation of the entire economy to serve a purpose which ends up being misguided.

Now, as a German-born British Australian with a Japanese wife, I’d like to suggest that, if you ignore your nationality and apply the following argument to all nations equally, you can say that the World Wars were a very bad allocation of capital. They should and would not have happened if it were up to consumers’ individual decisions.

When the wars ended, the world was left with a vast misallocation of capital. Soldiers came home looking for jobs. Manufacturing industry was geared to the war effort instead of consumer and production demand. There was ruined farmland, rationing, price controls and plenty more.

At the onset of peace, the economy faced a huge shift in what was to be produced and consumed, by whom, where and using what capital.

Because economists focus on how much GDP is produced, as opposed to what the makeup of that GDP is, and whether it makes sense, the post-war period was a sharp recession as the amount of GDP fell from plunging war-time production. That was eventually followed by booms in most cases.

But that post-war period was really about the reallocation of capital away from war production towards causes that actually made sense in a peacetime economy.

I want to argue to you today that we are in much the same situation thanks to the pandemic and the response to it. In my view, our economy is geared to the wrong things given our future. We face a vast reallocation of capital to fix this misallocation. And that promises to be disruptive well before any boom.

Now you might argue that our efforts to hold back the pandemic were worth it. But your views on that topic aren’t relevant to the point I’m trying to make. The world is changing to a post-pandemic system. And a lot will have to change.

Most of us expect some sort of boom as the economy re-opens toward the new normal. But I’m not so sure.

Well, after the wars, the industry would’ve had to rebuild itself. Starting from a very low base.

An economist would measure this as a drop in GDP because the ships which had been busily moving a lot of stuff for the war effort were suddenly left moving not much. The recovery did of course follow with cruise tourism, eventually. But that was not before a tough period as the industry realigned itself. And the real money was being made in aviation.

The current energy crisis is another example. Many of the energy intensive parts of our economies would’ve been struck especially hard during the pandemic’s lockdowns. I’m thinking of manufacturing, trade, transport and more.

Now we are experiencing the disturbance of trying to bring energy back online to serve the economy as it recovers. And we’re discovering that it’s not easy to do. There are shortages, not just out-of-control price spikes. This will likely lead to an energy boom. But not before the chaos we’re seeing now.

There are also vast overinvestments in sectors which the pandemic encouraged. PPE, healthcare equipment, health research, technology and other parts of the economy are likely to experience a hangover as things move to a post-pandemic reality.

The key part of the coming turmoil which investors need to be aware of is that the reallocation of capital, from parts of the economy which don’t make sense to those which do, involves a period of low GDP growth and poor broad investment returns. The energy companies that are currently going bust are a case in point.

In fact, according to the Austrian School of Economics, whose theories I largely follow, the definition of a recession is largely the reallocation of capital, not the lack of GDP, which is merely a symptom of such reallocation. Whatever the economy was doing before the recession didn’t make sense. The recession is a period of changing towards doing what does make sense.

That’s also why preventing recession delivers lower economic growth. You preserve unproductive industries and prevent the emergence of productive ones. But that’s another story.

What does the reallocation of capital actually mean? It means companies producing the “wrong” things in the “wrong” ways go bust and the companies that can do it better buy up those assets and get going.

That’s bad news for investors, initially. There is disruption and loss before improvement and a boom.

Investors need to be keenly aware that the world may well have changed after the pandemic, as it had after World War I and World War II.

What really matters is that the end of a gigantic misallocation of capital is not a boom, but a bust.

A huge proportion of the economic activity which we lost must be brought back, which is not easy and involves a drop in GDP and likely investment returns.

And a huge proportion of the pandemic-related economic activity currently taking place likely doesn’t make sense any more, or won’t soon. Again, this is a misallocation of capital which must be corrected. And such corrections take their toll on investments.

The narrative you are being sold about how our economies will recover fails to make a distinction for the fact that the capital in our economy has gone through the third largest misallocation of capital I can think of. The energy crisis is just one example of a consequence. Plenty more are lurking in our stock markets.

So, what do you invest in?

There are several strategies to adopt.

My friend Rob Marstrand at UK Independent Wealth has been frustratingly conservative for a reason. He is also worried about what’s coming for the global economy and stock markets. You can find out what his solutions and recommendations are here.