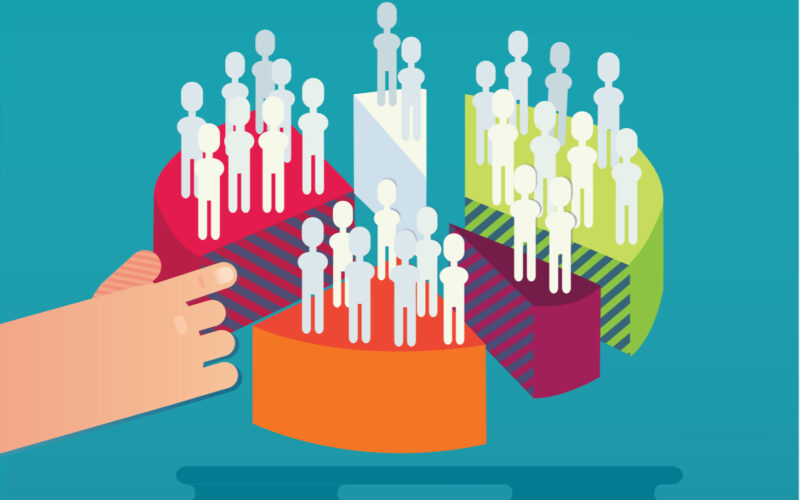 Welcome to part three of our analysis on how demographics move the stock market. Part one explained the key argument in simple terms. Part two used population pyramids to help out the visually minded.

And today, we dig into the cold hard maths of demographic doom for the stock market. In short, there will be a lack of young people to buy all the investments which a growing number of retirees plan to sell. Supply will grow relative to demand. And so prices will fall.

All this comes down to fairly simple maths. And demographics are very predictable over time. In fact, it’s one of the few aspects of the future we can predict with reasonable certainty. Another reason to favour demographics if you’re trying to make predictions about the stock market.

Which brings us to something academics call the M/O ratio. That’s the ratio of middle-aged to old-aged people in society. Remember, middle-aged people buy investments (demand), and old-aged sell them (supply). This is only true in general terms, and as aggregates, but that’s what matters to supply and demand – aggregates.

An M/O ratio of 2 tells you there are two people of middle-age per person of old-age. Two buyers per seller of investments. But it’s not the ratio itself that matters. It’s how the ratio changes over time – whether it’s rising or falling.

Over time, if the ratio is rising, the number of people buying into investments is rising relative to the number of sellers. According to the laws of supply and demand, you’d expect a bull market as the buying pressure bids up prices. That’s what happened as the baby boomers entered the stock market en masse.

If the ratio is falling, the number of sellers is growing relative to buyers. You’d expect a bear market, as the selling pressure lowers prices.

Sounds good, but does it actually hold true? It certainly did for the US over 70 years according to finance academics.

Demographics cause 61% of stock price movements

So far, I’ve only given you the theory of how demographics affect stock prices. What about the proof? Are demographics and stock markets really causally linked?

Academics have been on to the way demographics drive share and property prices for a long time. In 2011 two Federal Reserve economists did a research paper on the subject. The results are extraordinary.

First, they calculated a ratio of middle-aged to old-aged people, the same sort of M/O ratio I described above. People are buyers of shares in middle age and sellers in old age.

It turns out this M/O ratio is closely correlated to stock market price-to-earnings ratios (P/Es). So stock market prices, adjusted for profits, are dependent on how many people are buying versus selling, which is determined by the relative size of age cohorts.

So the proportion of buyers to sellers rose. And as the study continues: “During the same period, the P/E ratio tripled from about 8 to 24.” Investors were willing to pay vastly more per dollar of stock market companies’ profits. So the price people paid rose together with the proportion of buyers relative to sellers. Stock market prices surged in an extraordinary bull market. The only one, inflation adjusted, if you ask me. But that’s another story.

What happened as the M/O ratio began declining?

So, just how important is this M/O ratio to the stock market P/E ratio? The academics wrote, “We estimate that the M/O ratio explains about 61% of the movements in the P/E ratio during the sample period.”

It’s by far the most important factor.

And what does the UK’s M/O ratio predict for the FTSE?

An indefinite bear market in the UK

The following chart shows you the M/O ratio for the UK based on my calculations using UN Population Division Data: 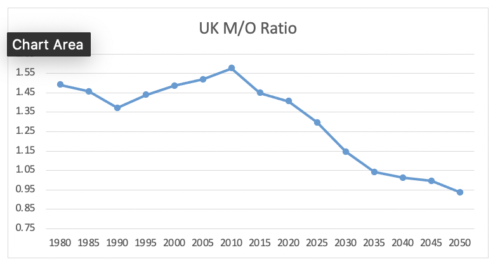 To be clear, this chart suggests an indefinite bear market in the UK. Just as stocks used to go up in the long run because of demographics, they’ll now go down.

In other words, the baby boomers accumulated the greatest store of wealth in history to prepare for retirement. But they forgot they’d need someone to sell it to.

Which brings me to one more version of this argument which I want to make. It occurred to me thanks to my research on all this in Japan.

Just between you and me:

I will not be your greater fool

Once young people realise what’s in store for the stock market – how many retirees plan on selling their shares in coming years – they’ll boycott the financial markets altogether. And at that point, they’ll crash completely.

Remember, the premise for investing is that the wind is in your sails. There’s a presumption of good returns over time. You just need to hold on long enough and stocks will go up.

But without that assumption, the whole premise falls apart. What if investments are expected to fall? How many people would invest? Not many.

Without a “greater fool” to sell investments to, the market crash will be even worse than simple demographics suggest.

The potential for a boycott of financial markets is very real. It happened in Japan. In 2016, Japanese investors owned a record low proportion of the stock market’s shares, despite huge campaigns to entice them. Foreign investors and the Bank of Japan are the only thing keeping the Japanese stock market afloat.

A boycott of the financialisation of our lives would undermine the very systems that are already struggling with demographics. The pension system and the stock market itself.

Not convinced? I don’t blame you

I don’t think I’ve ever convinced anyone of the above conclusions. At least not fully. Some days the radical change it all implies puts me off the whole concept too.

Not that I haven’t been trying to convince people. Since 2013, I’ve been on about the demographic change coming our way. I’ve told audiences from Spain to Australia about it.

If you believe there will be a rising stock market in coming years due to some sort of external factor, such as inflation, that’s fine by me. But you need to realise that the most important factor, which was instrumental in inflating stock markets in the past, will now be a drag. Indefinitely.

So, what do you do? Well, one option is to make more carefully targeted bets on specific companies that can outgrow profits faster than the demographic headwind.

Sam Volkering would like to help you try and do just that. Finding the best companies with the biggest growth potential is why he launched Frontier Tech Investor.