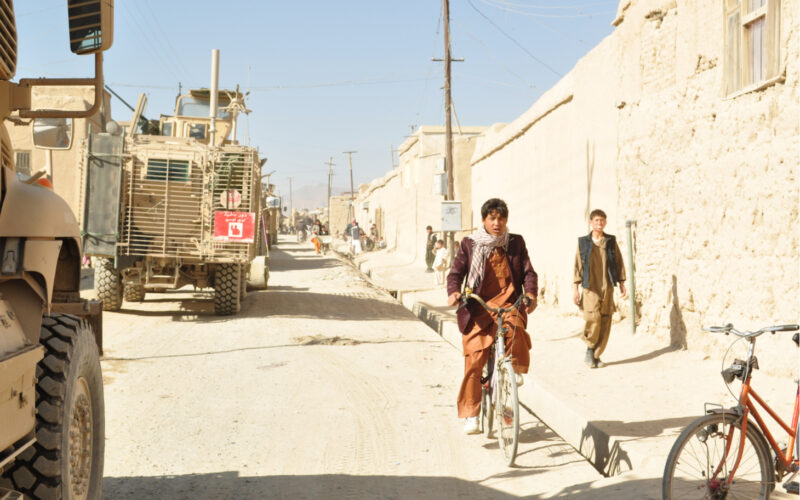 Two weeks ago, I asked Nigel Farage about events in Afghanistan and what it would mean for defence spending and defence stocks. Here’s what he told me, in case you missed it.

Well, I’ve just hopped off a Zoom call with Jim Rickards. He’s the first person in the world I’d turn to when trying to understand what happened in Afghanistan and what it means for defence stocks.

Whether it’s the CIA, the Iranian hostage crisis, the bailout of Long-Term Capital Management, the Pentagon’s first economic wargames, or any number of other crucial historical geopolitical and financial events, Jim was either there himself, or knows those who were there, and why they did what they did.

Although I can’t reveal what Jim told me here, I can allude to the way our video call played out, while some nuclear submarines sailed past outside the window behind him, by the way…

Specifically, it looks like there will be a boom in defence spending. But of a specific sort.

If you’ll remember, the withdrawal from Afghanistan was badly botched, to put it politely. (Jim didn’t put it politely and Nigel didn’t when the cameras were turned off.)

But what are the implications? Well, it seems the world is deeply unsettled by the United States’ move out of Afghanistan, not to mention how it did it.

The policy choice, and the failure to execute, may signal an end to American interventionism. Perhaps even an end to the willingness of the US to be the global policeman. Or even the competence of the US to carry out whatever intervention and policing it does choose to pursue.

In other words, Pax Americana may be over.

However you see it, the world is a less certain place.

Cue the reaction around the world to this realisation.

Within weeks of the botched withdrawal from Afghanistan, Australia has announced a new defence deal with the UK and US (leaving out New Zealand), highlighting their intention to acquire nuclear submarines, and their decision to buy American Tomahawk missiles.

The European Commission, left without a respectable sized army since Brexit, is agitating for a defence force of its own so that it isn’t reliant on the United States for protection. (If you had followed the career path of Ursula von der Leyen, a former German defence minister, you would be laughing heartily at the prospect of this actually happening under her watch.)

Anyway, the world seems keen to arm up in the power vacuum left by the United States. This is, of course, what Donald Trump tried to engineer. Only it seems that Joe Biden has actually managed to pull it off, albeit in spectacularly bad fashion.

The overall aim of the game is to counter China and its ambitions.

As Jim Rickards pointed out to me, China can be encircled geographically with an alliance between the nations that can police its coast. That means Japan, Australia, the UK and the United States – each providing either long range naval might or geographic advantage.

But all of this will require a huge amount of defence spending. And that’s the investment angle.

The more mighty and powerful China gets, the more other nations will be forced to match it.

So far, so obvious. But there are two interesting twists.

The first is whether nations are willing to spend the amount of money they’ll need to in an age of excessive debt and spending.

And second, which defence stocks specifically will benefit.

It seems that the UK is trying to restrain its budget. And so, a defence spending binge is less likely to be on the cards here than in places like Japan, Australia and Europe, where governments don’t seem to be making the same shift.

Therefore, I have my eyes on defence stocks in places that are most likely to sell to those nations’ governments.

But which types of military spending will they pursue?

Jim Rickards mentioned that hypersonic missiles may have changed the naval game, much like aircraft carriers did in World War II. What type of hardware a nation needs could completely shift, leaving the old technology in trouble.

Perhaps the most interesting angle so far is what happened in uranium.

Anyway, if governments around the world do go on some sort of defence spending binge, the chances are that they’ll be buying a lot of nuclear-powered hardware. This is what the French have found out to their dismay, with Australia tearing up the agreement to buy French diesel submarines in favour of the nuclear ones. “It’s a stab in the back,” said French foreign affairs minister Jean-Yves Le Drian.

Of course, the UK’s stock market has a decent representation of stocks with defence industry sales. BAE Systems Plc (BA) and Rolls-Royce Holdings (RR) are the household names. But there are others…