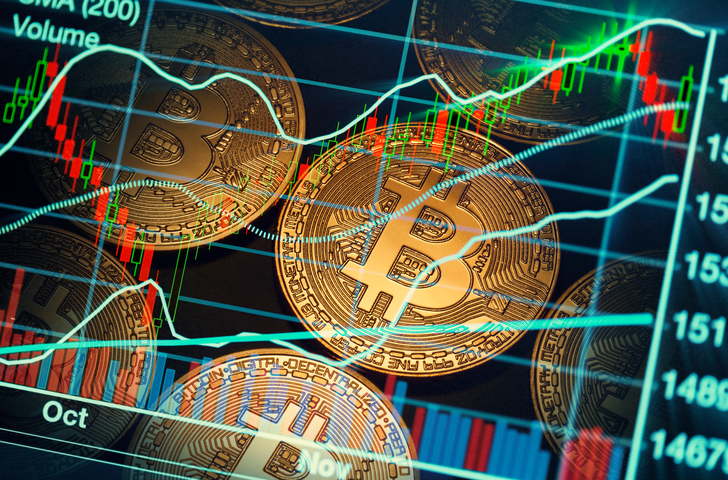 Today’s Fortune & Freedom turns to a very experienced hand when it comes to cryptocurrencies like bitcoin. The man who first told me about it, many years go.

Sam Volkering kicks off his “Ultimate Starters Guide to Crypto” like this:

My experience in crypto goes all the way back to 2010 and 2011 when I first got involved in bitcoin and in 2012 and 2013 when altcoins really started to become a “thing”.

I bought bitcoin as low as $12, Ethereum when it was $10 and Ripple (now XRP) where I made a 20,000% gain in just a couple of short years. I also had bitcoin in the failed Mt. Gox exchange, and the failed Cryptsy and Mintpal exchanges.

I’ve been around a while, seen a lot, learnt a lot and even wrote a book in 2016, Crypto Revolution: Bitcoin, Cryptocurrency and the Future of Money. Without blowing my own trumpet too much, I know about the space, where it’s come from and where it could be heading.

Sam publishes a service about cryptocurrencies. And his guide and book are for those readers only. But today’s Fortune & Freedom continues our journey from yesterday’s discussion of bitcoin.

That discussion mentioned the confusing statement that it’s not helpful to ask “what is bitcoin?”

I probably learned that line from Sam’s book:

The name Bitcoin itself does no favours to people trying to understand exactly what it is. Upon first glance people naturally assume it’s a “coin”, a currency that you use. And in some aspects of Bitcoin’s intent and origins, yes it is indeed a currency. But it’s more than that. Bitcoin is like nothing else the world has ever seen before. And as such, we shouldn’t try and compare it to gold, stocks, cash, currency – it’s unique in so many ways.

A good place to start with what exactly Bitcoin is, is to simply think about it as nothing. Drop any preconceived idea that it’s like gold, stocks, cash or whatever. Think about it at its base level as simply some lines of computer code. Code with extremely tight cryptography principles and mathematics, which make it like no other financial instrument before. That doesn’t make it hard to use. It actually makes it secure when you consider how you then get Bitcoin and how its “blockchain” functions.

Bitcoin is just one of many cryptocurrencies which use blockchain technology. And there are other uses of it. The Australian Stock Exchange is exploring the transition for its entire share registry system, for example.

But that still doesn’t answer your question…

Back to Sam’s book:

Bitcoin in its purest description is, “A purely peer-to-peer version of electronic cash”. It allows the transfer of payments from one party to another without going through a financial institution. It cuts out intermediaries and middlemen. It allows people to buy pigs and chickens and cows without a central issuing and controlling authority. Its aim is to reduce barriers, cost and borders of global finance. It was and is for everyone, to benefit everyone. Not just the elite, not just the powerful and already wealthy. It’s the libertarian, anti-establishment, alternative digital financial system.

That’s what bitcoin delivers. But what it is, is best answered by how it works.

Bitcoin is what you transact on a distributed ledger. This is an open digital book which shows every transaction of all bitcoins, ever. Because of this ledger, who owns which bitcoin is clear and hard to dispute. That key benefit is what makes distributed ledger tech useful for registering ownership of things, such as currencies and shares.

The process of adding bitcoin is connected to the continuous verification of this ledger, but that’s another story. The point is that the ledger’s verification isn’t based on one entity’s authority, but a sort of consensus approach. One which is incredibly difficult to falsify.

This power is what makes cryptocurrencies suddenly plausible. They are built on a system which demonstrates ownership of something in a new way. A way that even governments can’t meddle with.

But if the ledger is open, is bitcoin anonymous?

The simple answer is, it can be if you want it to be. Sam explains why this is true, while also illustrating how bitcoin works in practice:

And (at least to begin with) Bitcoin was also built around anonymity. It achieves a level of anonymity because its core code is based around cryptography, mathematics and encryption. That’s also worth noting. At the end of the day, Bitcoin, or any cryptocurrency for that matter, is nothing more than computer code – at least literally. And to many people the idea that something so intangible can have tangible value is a difficult concept to overcome. But once they do, and once they become a part of the belief system that says Bitcoin is worth something and can be used as a medium of exchange for goods and services, then it’s inherently worth something.

This is regardless of there being no physical “good” to back it. And besides, the money you now use, that’s really only backed by debt – that’s even more intangible than Bitcoin’s code. Remember, Bitcoin is unique in that nothing like it has existed before with the capacity for widespread mass adoption and mass belief.

Continuing on with the privacy aspect. The way in which Bitcoin attains its quasi-anonymity is via the use of what is known as “private keys” (a form of encryption). In that way, only the holder of a private key can have access to the corresponding wallet that the private key opens. Each wallet also has a “public key”, which is the address that users use to make transactions. But privacy can be maintained as the public keys are unidentifiable to a particular user. And as long as private keys are kept private, then no third party can access a wallet.

By using this method of public and private keys, third parties and counterparties can be removed from the flow of payments from one to another. It means that a user becomes their own bank, responsible for the storage, safety and transactions to and from their wallets. This enable peers (you and I and anyone else) on the network to send payments and make transactions. We can do this with safety and security as the network that records the transactions “signs” these transactions using public keys to verify the transfer from one “wallet” to another.

And this process of signing and confirming transactions within the network means that the network is 100% accurate and foolproof. The network itself becomes the trusted source – but as the network is distributed amongst the users, everyone is a part of the in-built trust of the network. In short, with Bitcoin you simply make transactions through its network, which is known as a “blockchain”.

In making transactions through the blockchain from one location to another, no bank, no government, no third party or intermediaries touches it, sees it or has anything to do with it. It is completely peer-to-peer, and it is (mostly) anonymous.

The anonymity of Bitcoin was part of its initial appeal. But this aspect also drew the ire of authorities and lawmakers. This was particularly controversial as Bitcoin was the primary payment method through the deep web and on illegal goods sites like Silk Road. And sure, to this day it’s still a form of payment for illegal activity because of this – but so is physical cash.

While the use of public and private keys with Bitcoin allowed the senders and receivers to remain anonymous (and still does), all transactions on the blockchain are still a matter of public record. For example, I can send you 1 Bitcoin from my Bitcoin wallet. All I need is your public key. All you ever see is my public key. We can’t access each other’s wallets because neither of us has access to the other’s private key. All we see is the anonymous public key.

The key to anonymity is to keep your public key anonymous. If you connect your public key to your identity in any way, your entire transaction history is on display for the world and its tax collectors and law enforcers  to see…

PS Do you have questions about bitcoin and other cryptocurrencies you’d like answered by an expert? And asked for you by none other than Nigel Farage himself? Let me know at [email protected] And then keep an eye on your inbox…