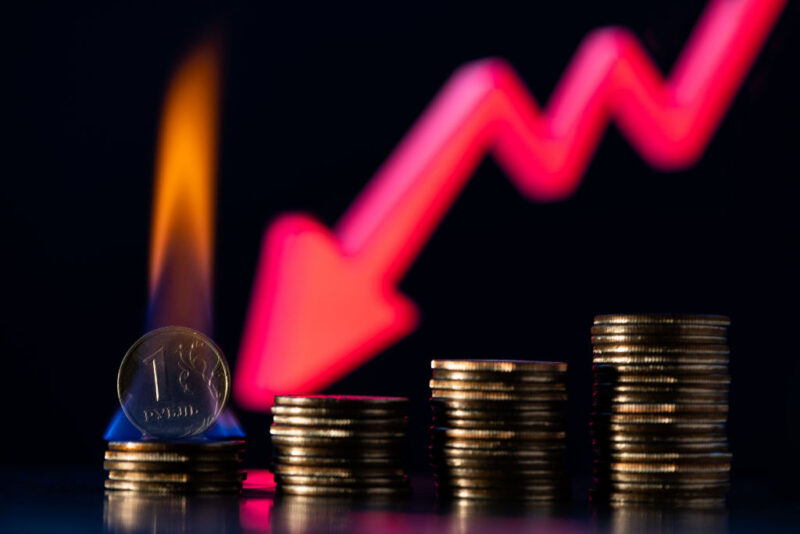 Yesterday, I introduced you to the tyranny of the denominator. Today, we apply the idea to financial markets to help you avoid its effects. But first, here is a reminder of what it is.

The idea is that, when we measure things over time, they tend to change in such a way that undermines the analysis. Changes in the nature of what we are measuring ends up obfuscating the comparison.

Sure, stock markets go up in the long run. But how much of that is due to inflation – the devaluation of money?

Sure, economies grow. But how much of that is due to population growth and not people’s standard of living improving?

Those were our examples from yesterday. Today, we turn to investing and the financial markets, which are especially susceptible to these problems.

You have to beat inflation just to generate a real return, for example. But that’s not exactly easy when inflation could hit 22% in the UK next year. Still, that’s what you need to be aiming for, just to get ahead. So, how could you do it? Find out here.

Not many people invest in Japan these days. The country has had a “missing decade” for three decades now. Economic growth has been miserable and Japanese people are used to deflation. Many get pay cuts each year.

But this analysis may be flawed because of the tyranny of the denominator. GDP is a function of productivity and population. Because the rest of the world hasn’t had much demographic decline yet, they do not routinely adjust Japan’s statistics for this effect.

Japanese people often get pay cuts because their cost of living tends to fall. Deflation makes their money worth more over time.

Once you adjust for both population and purchasing power parity (the cheaper cost of living in Japan), you’ll find the Japanese economy is doing great. And you should consider investing in it.

Everyone who has been to Japan can attest to this, of course. You see dilapidation in abandoned places in the countryside, but very high quality of life in other parts of Japan. This is especially so when you adjust for the cost of living.

During the recovery from the Covid crisis, as flights began to reappear in the sky, data analysts cheered this as a sign of the economic recovery and bought airline stocks. The problem was that the flights were often empty…

If you compared the number of flights before the pandemic to after, you were comparing apples to oranges. More specifically, apples had become oranges. You would’ve reached the wrong conclusions about the recovery in air travel. And the economy in general.

My article about the rising US dollar is another prime example of the tyranny of the denominator which investors need to keep in mind.

What if markets haven’t actually crashed in 2022? It’s just that the denominator they’re measured in – the US dollar – has become more valuable relative to everything else.

What if the pound isn’t going down, as the media reports, but the US dollar is going up?

The point is that the value of the US dollar changes, so comparing things in terms of US dollars (prices) over time is misleading. The denominator has changed.

Another example comes from stock buybacks. Instead of paying out dividends, companies are buying back their own shares on the market. This means each of their remaining shares held by investors owns a slightly larger share of the company, which is good news for shareholders.

But it makes a meal of comparisons over time, because the number of shares is declining over time. You have to adjust for the changing denominator.

Is the company’s value really rising as share prices go up, or are they just buying back their own shares, making each stock more valuable, but not the overall company?

Central banks have been busy soaking up all sorts of investments over the past 13 years now. This has fundamentally altered those markets and their ability to send price signals because the assets they hold are basically taken out of the market. The central banks have also distorted the money supply. Those two denominators are crucial parts of markets.

If you presume market prices reflect reality in those markets, you might make wrong decisions. They often reflect monetary policy instead.

The point of this article is not to provide a long list of examples of the tyranny of the denominator, but to make you aware of it. I want you to be able to see it for yourself. And then don’t let it mislead you when it’s there.

So, when you’re confronted with a measure of something over time, ask yourself whether something else that underlies the measure might be what’s behind the change. Have apples become oranges?

And never forget, as Mark Twain is credited with saying, “It ain’t what you don’t know that gets you into trouble. It’s what you know for sure that just ain’t so.”

PS Back in 2018, I wrote a series of reports on Italy’s upcoming elections and the impact they would have on markets. Over time, I turned those reports into a book. Today’s Fortune & Freedom will become a book one day. It’s only the seed for now. But I do need your help to write the rest of it.

I’m collecting the countless other examples of the tyranny of the denominator from our society and economics. Can you help me with some examples of your own? [email protected]