Why Britain will boom after Brexit 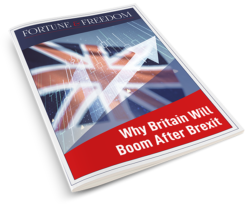 On 16 September 1992 an extraordinary event occurred. It completely changed the nation and the course of the rest of my life.

On that day the UK government put interest rates up to 15% in a desperate attempt to keep the pound stuck inside the Exchange Rate Mechanism (ERM). No matter that house repossessions and bankruptcies were running at a record rate, our devotion to the European project mattered more than the wellbeing of our people.

But it didn’t work. And the day soon became known as Black Wednesday. We crashed out of the system and the pound began to float on the exchanges again.

For the previous two years I had been certain that the ERM was not for us. It was a precursor to a single currency for the European Union. In economic terms I could see that our economy was totally different to that of Germany, the dominating country of Europe. That made sharing a currency a bad idea. In political terms, a country without its own currency, nor control over the economic levers, can never be truly independent. And yet our entire political and business class had bought into this scheme.

I was determined that day, that even if it was a futile effort, I was going to do something about it. And so began a campaign that would dominate the next quarter of a century of my life.

As the 1990s unfolded it became clear that the single currency, later known as the euro, was a tool for bringing about a full United States of Europe. All of this was to be constructed without ever asking the people whether they wanted it or not.

To unlock the rest of this urgent research briefing, it’s easy…

Simply pop your email address in the box below. You’ll get unrestricted access to all of our reports and videos. Plus you’ll start receiving Nigel’s new financial letter, Fortune & Freedom, every morning at 9am!