No honour amongst trade negotiators 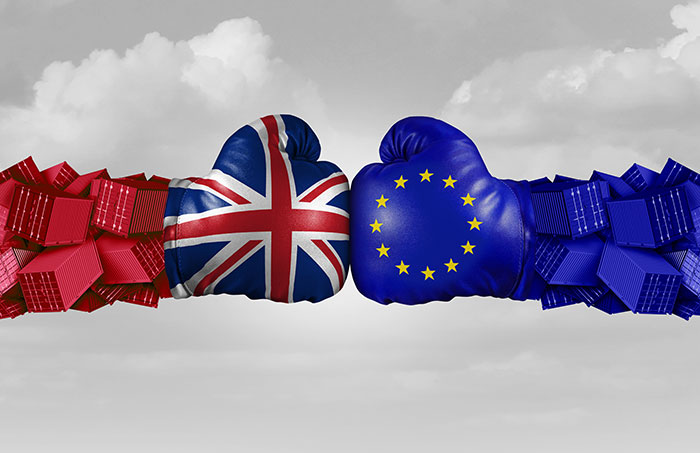 Let me ask you something.

If a pickpocket steals your wallet, but gives you some of the money back, how would you feel about it?

Would you be furious that your wallet was stolen? Or would you rejoice over the money you got back?

Well, when it comes to Brexit, most of the country is about to rejoice over the share they get back from the pickpockets who took from them in the first place. Pickpockets on both sides of the Channel.

I better explain myself…

Free trade is the natural order of things. Whether you trade with an Englishman or a Frenchman makes no difference. Until the government steals away your right to trade internationally.

It’s the politicians who prevent free trade in the first place. They come up with all sorts of ways to rob you of this right. Quotas, tariffs, taxes and red tape.

Then, and this is the really outrageous bit, they announce so-called free trade agreements. Where you’re allowed to trade internationally again. But only some items, under certain restrictions, with certain countries. Only by leave of politicians, in other words.

This is similar to when a pickpocket steals your wallet, but gives you some of the money back, and expects you to be grateful for it.

But it was the politicians who took away free trade in the first place.

The EU’s big achievement was to abolish this sort of nonsense. Within the EU, at least…

But don’t forget, it was the same governments who robbed you of your right to trade with Europe who then gave it back again by joining the EU. And you’re supposed to be grateful. To celebrate the wisdom of the politicians who are pro-free trade and EU!

That’s even worse than a pickpocket giving you back some of your money. It’s like selling you back your own stolen goods. Or blackmail – “Vote for me and the EU, or we’ll stop you from trading with Europe!” And that’s considered to be the pro trade position!?

If free trade is good, why the hell did they ban it in the first place!? And why do politicians get credit for rolling back their own restrictions, as though it’s some sort of achievement!?

Why do we need to join the EU in order to trade freely with other nations in Europe?

But Trump is the only politician I’ve ever heard suggesting truly free trade. At the Quebec G7 summit in 2018, he even proposed it:

No tariffs, no barriers, that’s the way it should be. And no subsides, I even said not tariffs.

Ultimately that’s what you want, you want tariff free, no barriers, and you want no subsides because you have some countries subsidizing industries and that’s not fair.

So you go tariff free, you go barrier free, you go subsidy free, that’s the way you learned at the Wharton School of Finance.

And that’s the way it should be.

Why do politicians ban trade?

Politicians like trade barriers. It gives them power and influence. And the ability to get campaign contributions from the industries seeking to influence the trade negotiations.

In 2016, I found myself sitting between two very large Russian economists in Moldova. I was on a speaking tour promoting free market thinking. The economists had given speeches about why the free trade agreements which Moldova was negotiating at the time would be a good thing.

Most people expected the free marketeer to agree. Free trade is free market, right? So surely a free trade agreement is good?

But I went on the same rant I just did with you.

That reference did not go down well with my fellow Russian panellists, I can tell you. The audience gasped too. I only learned why much later.

It turns out that, in Moldova, not only had politicians created the very barriers to trade which they were supposedly lifting with their wonderful free trade agreements, but those same politicians had made their wealth by smuggling…

In other words, they’d banned free trade and then grown rich by flouting the ban…

Now, in places like Moldova, everyone knows how corrupt politicians are. They see the convoys of white Land Rovers smuggling cigarettes across the borders. They know that the politicians and their friends make money by creating trade barriers and then evading them. Customs officers don’t arrest politicians… at least, not the ones in government.

So people understood what I was saying – politicians are selling you back your own stolen rights by making trade illegal and then announcing a free trade deal. Unfortunately, you’re not supposed to mention this sort of thing in Moldova.

But here in western Europe, people assume that there is no trade between nations unless there’s a trade agreement or the World Trade Organisation oversees it. As though borders are a wall which we need government officials to help us over.

That couldn’t be further from the truth. For trade not to be free, governments have to ban it first. They build the wall. To lock us in. And then they build a gate, which they control, and call it a free trade agreement.

Let’s apply all this to Brexit.

In coming weeks, we expect a trade deal with the EU to be announced. There will be all sorts of reactions to this, whatever the deal may be.

I doubt many people in Britain could figure out for themselves whether the deal is good, bad or ugly. I couldn’t without studying it for days. And we probably couldn’t agree on what would be good, bad or ugly in advance anyway.

The arguments about it all will be immense. And immensely misguided.

Either way, I’ll never stop being annoyed by the way the whole trade negotiation game has been framed. It’s like watching people debate about how much money and which particular items pickpockets should give back to their victims. What rights should we citizens – consumers and producers – be given back by our masters who took away those rights?

We should have the right to trade with people in other nations, free of restrictions by governments. As long as we act in line with their internal laws and our own, of course. But restrictions on trade are just absurd. As anyone who is in favour of free trade agreements suddenly agrees with when that agreement is proposed…

Have you noticed how advocates of the EU are in favour of free trade, unless a nation leaves the EU? Then, suddenly, free trade is bad… That’s the position of the EU’s negotiating team. But it’s absurd. Either trade is good, or not.

Worst of all, so called “free trade agreements” aren’t actually about free trade at all. They’re really about what not to trade freely. Which goods and services should not be free to cross borders without barriers.

Have a read of one of the trade agreements. They’re full of trade restrictions, not about free trade.

After all, there would be no need to have a free trade agreement if it was about free trade. You would simply not have the restrictions in the first place.

True free trade is the absence of a free trade agreement, or any other government interference.

Instead, we’re going to get some incredibly complex agreement between the EU and UK. The only real question is when – before or after Brexit supposedly happens, if it hasn’t already. They’ve even obfuscated that…

So, don’t be fooled by whatever turn the Brexit negotiations do end up taking. It’s your right to buy and sell from and to people in Europe which they’re carving up, either way. A right that will be taken from you, no matter what the deal looks like.

The real question is whether the government adopts proper free trade in the future, as Trump suggested. Not trade agreements – free trade by cutting our trade restrictions.

Those lorries queuing at Dover? Just wave them through! Why would we stop them?

Unless you’re worried that EU standards on goods are sub-par, of course…