Today’s the day Sam Volkering has chosen to reveal the magic about to happen to the cryptocurrency market. Keep an eye on your inbox for more information at 5pm London time.

Although, if you can’t wait, you can find out more about what’s coming in this video, which Sam shot from a cryptocurrency conference.

Back in the legacy financial system, as the crypto-punks call it, there has been plenty of action too…

I’m reading the books which inspired the film Master and Commander, starring Russell Crowe. A key theme is how much the elements matter. The captains can “Master and Commander” all they like, but the tide, the trade winds, the doldrums and the cloud cover are very much in charge of the ship in the end.

It has been the same way for investors. Imperceptible tailwinds and headwinds determined your success, as opposed to your own initiative, courage and skill.

Examples are plentiful and include:

In the midst of all these truly gigantic shifts, the individual investor felt like a battered brig having to go to India by way of South Africa by way of Brazil.

For those who didn’t understand why they were heading north despite pointing their ship south and making good headway each day, it would’ve been a tough time to lose money. But, if the tides are against you…

Of course, each time the underlying winds and tides changed, investors risked getting caught out in the doldrums, or worse. Those secular turning points are crucial to identify and set apart from the cyclical to and fro which occurs during a secular trend.

I believe that another secular shift is drawing near. In fact, the big question is whether it has happened already…

Since the 1980s, inflation has been in secular decline. For a long list of reasons, including trade with China’s and our own domestic monetary policy in Western nations. This meant that bonds outperformed other investments, on a risk-adjusted basis. And investors didn’t need to fear being dispossessed by the evils of inflation. Financial promises meant something, even over long periods of time.

But what if that changes? What if it has already changed?

For example, commodities are a good investment during inflationary periods. They’ve underperformed terribly for a long time now.

The bull market in bonds might finally reverse, undermining the most basic cookie-cutter portfolio advice which financial advisers have been busy charging their customers for. A balanced portfolio of stocks and bonds might not be a good idea, as Nigel Farage and Rob Marstand made clear in past videos for Fortune & Freedom.

But what makes me bring all this up today? That’s a secret for my subscribers at Gold Stock Fortunes. But I can reveal some of what I warned them about in Tuesday’s monthly issue…

The big question we face is whether we’ll see another deflationary debt crisis or not. Whether the downtrend in inflation and interest rates will have one last “garghhh” moment for investors. Or whether inflation has finally broken out and is set to last more than a decade.

You see, for decades now, during the secular downtrend in interest rates and inflation, we’ve had a series of crises. Each crisis occurs while monetary policy is tightening. And, because of the crisis, monetary policy is subsequently loosened.

Are we in for another one of these cyclical sequences of events? Will central bankers manage to tighten monetary policy enough to trigger another financial crisis? Or have we reached the end of this cycle and are in for inflation?

The answer is… I’m not sure. But, until recently, I was very much in the inflation camp. In other words, I expected central bankers to abandon monetary policy tightening because of the debt crisis it would cause. They’d favour inflation instead.

In other words, even a small amount of tightening would trigger such a severe debt crisis for mortgage payers, governments and companies that it simply couldn’t happen. Allowing inflation to run riot was the lesser of two weevils, as they say in the film Master and Commander.

And that is the key question: which of the two weevils will central bankers choose? Because, their options have run out, with interest rates at zero and inflation dramatically higher, they must pick one of the two.

They can trigger a debt crisis by tightening monetary policy, or they can let inflation get out of hand.

Like I said, I’m not so sure which they’ll choose any more. And my readers at Gold Stock Fortunes know why I’ve grown worried that central bankers may in fact trigger one last crisis by tightening monetary policy.

But I want to know what you think…

Will we have one last deflationary debt crisis, or is a secular shift to inflation already upon us?

Prepare for inflation
Another crash is coming 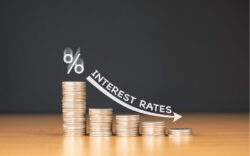 person Nick Hubble
schedule 27 December 2021
Over the Christmas and New Year break, we’re looking back at some of the most important letters we sent to you in 2021. And today’s…
Stocks

person Nick Hubble
schedule 14 October 2021
Today’s the day Sam Volkering has chosen to reveal the magic about to happen to the cryptocurrency market. Keep an eye on your inbox for…