Burn the banknotes to keep warm 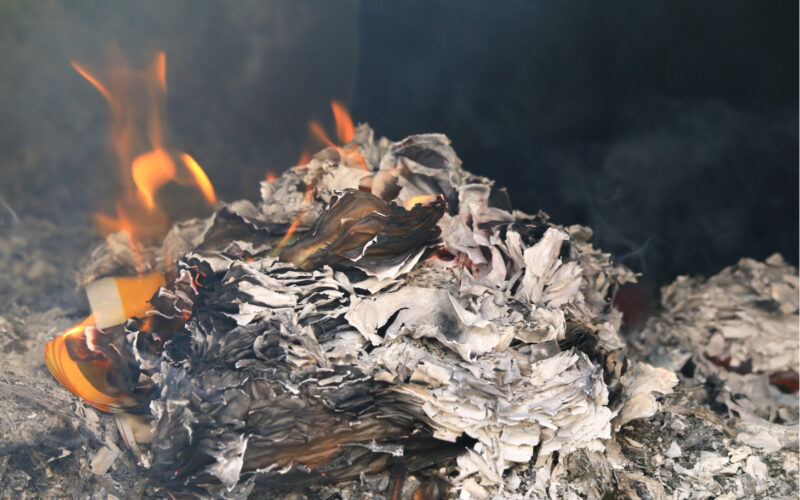 Can central bankers print HGV licences? Can they launch container ships made of paper money? Could we burn banknotes in lieu of gas to keep warm? Will the Federal Reserve’s helicopters make our windmills turn?

How much toilet paper can you buy with your stimulus cheques when supermarkets are rationing purchases? How many of the Bank of England’s staff can be reassigned to restocking shelves at Tesco Waitrose?

To believe that tighter monetary policy will solve our present bout of inflation is to believe in sinking a ship to bring it closer to land. You’re completely missing the point.

You see, inflation is being caused by disruptions to the economy. There are bottlenecks everywhere, even outside Brexit Britain.

Omicron is imposing ghost lockdowns, with spending in some cities hitting lockdown lows.

Governments are imposing work-lockdowns by keeping people isolated. Other governments are still imposing actual lockdowns. As ever, Australia is not to be outdone, and so it’s imposing “lockouts” too.

The great resignation continues, with the unvaccinated taking over from the economically disillusioned and early retirees. And sometimes it’s not a resignation but a firing.

The list goes on and on. And the consequences of all this are on show too.

We have run out of new commodity prices to spike and plunge, so we’re back to the likes of lumber, which is taking off again.

Similarly, supermarkets are back to rationing toilet paper. And some city centres in Australia are looking like ghost towns even without lockdowns.

Ports are still backed up with shipping, containers, queues and trucks almost a month after US President Joe Biden declared victory over the supply chain crisis.

Food prices were close to a record high at the end of last year.

Retail energy prices in Europe are soaring as companies get sick of going bust and pass on costs instead.

The list of reasons for inflation to soar goes on and on too. But the point is that interest rates and tapering quantitative easing (QE) do not solve the underlying problems, nor do they deal with the consequences the problems create.

Trade is financed by debt. Companies borrow money to buy the goods they shift around. Making that debt more expensive means less goods get shifted, or price increases are passed on, or corporate profits take a mighty hit.

In the world of trade and commerce, time costs money. And interest rates are the price of time. Thus, delays cost more when you raise rates.

Perhaps most important of all is the risk of companies going bust altogether, which becomes more likely when their debt begins to cost more. As one commentator in the Australian Financial Review put it, “Be afraid: the zombie economy can’t last”.

No, the financial media hasn’t grown an imagination. “Zombie company” is a technical term. It’s a company that cannot meet its own debt payments from profits. It must borrow more to pay off old debts, in other words. Rising interest rates make this more challenging, tipping ever more companies over the edge.

And so, tightening monetary policy now could actually worsen inflation by adding financial bottlenecks to supply ones.

Now, don’t get me wrong. Interest rates should be closer to 10% than 0% given inflation, unemployment, GDP and debt. But this would trigger a major debt crisis. In fact, we may already be in one… of a sort.

Over at Southbank Live, my colleague John Butler, who first warned you about inflation days before it kicked off last year, has been pointing out a corporate debt bloom which has taken off. Find out why, and what it means for investors here.

But let’s recap before we go on. Tighter monetary policy will not solve inflation. But we do need it. But it would likely burst a debt bubble if we get it…

This leads to a seemingly impossible conclusion. Well, one outside the Overton Window since the 80s, anyway. The idea of deliberately popping a bubble.

The first rule of a bubble is: you do not talk about the bubble

You see, bubbles almost always burst. Nobody wants them to. But they do, eventually.

This raises an interesting question. If monetary policy should not be this loose, but tightening it would trigger a crash, what should we do?

Should we burst the bubble now, or should it be kept going for as long as possible?

What the current outbreak of inflation has done is force central bankers to make this choice.

Of course, the mission of the central bank is supposed to be taking away the punchbowl when the party gets out of hand. But these days, they’re too busy spiking the punch with unconventional monetary policy instead.

The point is that central banks are cornered. They must choose between their many mandates. Inflation is forcing them to do this, for the first time in decades.

Perhaps more important than all of this is the potential for inflation to continue soaring in a way that makes any attempt to rein it in look pitiful.

You see, once inflation grasps hold of an economy, only the most drastic action can restrain it.

That is why, even though what we have seen so far may not be true inflation at all – price spikes from supply chain disruption are not the devaluation of money – that true inflation may come next.

Tomorrow we look at how the governments’ responses may be just as good as the central banks’ (in making inflation worse).