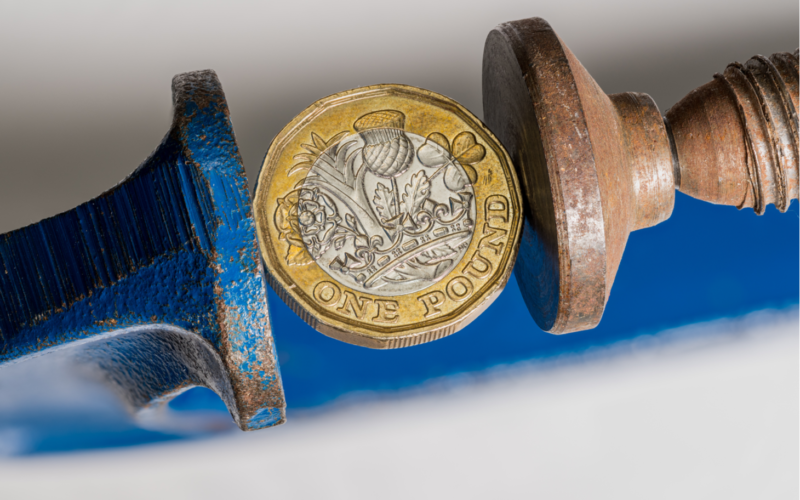 Although considering all the possible paths our future might take is important for investors – we don’t have a crystal ball – I’d like to stick with the inflationary path for now. For a simple reason. Few of us are prepared for it. And yet, the threat of an inflationary outbreak is running particularly hot right now.

So, while Nigel Farage remains more worried about a deflationary crash before inflation emerges, I think it’s time to update you on the inflation story.

As we’ll get to below, prices are surging all around us. Some are included in the government’s consumer price index (CPI). Some aren’t.

But here’s what I’m most worried about. The reason we should take this threat so seriously…

A little inflation would quickly mean a lot

Well, a lot would happen. But one place from which you’d expect a lot of action could be eerily silent.

You might think that central bankers learned their lesson in the 70s. Inflation is hard to get back in the box once you’ve let it out.

But, according to their own pronouncements, central bankers now believe we need a serious dose of inflation. They’re proposing to let it out of its box again.

Roger Bootle explained in the Telegraph:

In the US, the Fed has made it clear that it would not react to higher inflation by raising interest rates immediately. For a while, it would tolerate inflation running above the 2pc target. The Bank of England would probably behave similarly.

This would have the benefit of reducing the real cost of financing the Government’s deficit even more and reducing the ratio of government debt to GDP. Of course, this would be far from a victimless policy. Savers would suffer and the costs of inflation would gradually seep through the system.

US Federal Reserve chairman Jerome Powell has said this: “At the end of the day the public will need to see us allow inflation to move moderately above 2% for a time before the new framework will be seen as fully credible”.

To me, it is jaw dropping to have a central bank declare that inflation will be allowed to run above its legal mandate. Try arguing with a speeding ticket with the same logic: “My average speed has been low for a long time and I should therefore be allowed to ‘overshoot’ on the M5.”

But the Daily Mail has the craziest bit: “Federal Reserve won’t raise interest rates until at least 2023.”

It’s committed to two years of no interest rate increases? A lot can happen in that time…

And the price surges may already be underway…

While the US CPI came in at 0.4% for December, and the UK’s at 0.3%, this hides a lot of the real action. Consumer prices may not be surging yet. But producers’ prices certainly are. And if you think those costs won’t be passed on, you’re dreaming.

“Surge in shipping costs adds to inflation worries” reported MarketWatch. “In 2020, rates on the busiest routes from China to the west and east coasts of the US ended 208 per cent and 110 per cent higher than in 2019,” the blog China Macro Economy calculated. According to a Bloomberg chart, the cost of shipping from Shanghai to Rotterdam is up about sixfold from 2019 and 2020 levels…

If that seems like a distant problem, consider that it’s leading to outright goods shortages in Europe! The costs make it uneconomical. The Financial Times has a bizarre example:

Frucom, which represents European traders of dried fruit and nuts, said in a letter to the European Commission this month that one of its members had been quoted $16,500 to ship a 40ft container, up from $2,150 in November.

Why are they complaining to the European Commission!? Don’t they know it’s busy?

Recent economic data from the US combined less consumer spending with higher consumer prices. But reassured investors that the central bank wouldn’t be increasing interest rates, even if inflation does surge.

IHS Markit, in its Flash Purchasing Managers’ Index release for the US, recently reported “The rate of input cost inflation [in January] was the fastest on record (since data collection began in October 2009), as soaring transportation and PPE costs were also noted.”

These costs of production will be passed on to consumers over time.

Commodity prices are also booming. “Seaborne iron ore prices defied the usual late year seasonal slowdown to hit multi-year highs in the final quarter of 2020,” reported S&P Global. And “Bullish sentiment drives copper price to 8-year high.” US petrol prices are back to where they were before the pandemic. The price of wheat, corn, and soybeans recently hit a six-year high, reports Wolf Street.

The rush into cryptocurrencies is another example of pending inflation, if you ask me. But we covered that here.

China, which will become a rather important theme of Fortune & Freedoms to come, is another source of inflationary fears. After a few decades of keeping our consumer prices down with the help of “Made in China” labels, the worm may have turned. It is no longer as cheap to manufacture there. Especially with a trade war on…

So, it looks like inflation may be on our side of the horizon, not over the horizon as first thought. And it’s heading our way.

Is the man responsible for the world’s reserve currency worried about all this?

Sort of. Fed chair Powell had this to say:

I’m much more worried about falling short of a complete recovery and losing peoples’ careers and lives and the damage that will do to productive capacity than about the possibility of higher inflation.

I think Powell needs to reread yesterday’s Fortune & Freedom. Or just James Callaghan’s speech, as we quoted it.

Inflation causes the very things he’s trying to avoid. That’s why he has an inflation mandate. That he’s supposed to abide by. Not overshoot or delay enforcing.

Believing that inflation benefits an economy is one of those old theories that just fails to die, no matter how many times it is disproven.

Governments never learn, only people learn. So said the economist Milton Friedman. While advocating that the government’s central bank should set interest rates and control the money supply…

Did you learn from the last bout of inflation?