Borrowing capacity is not wealth 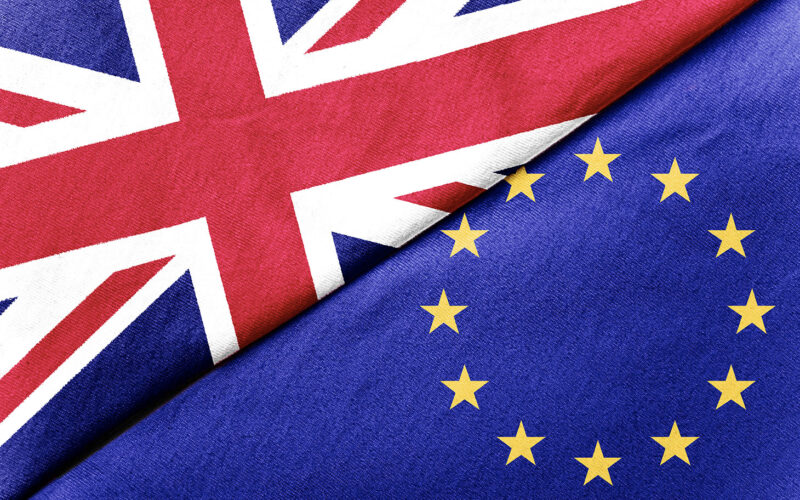 It’s a picture that paints a thousand words. Unfortunately, I’m not allowed to show it to you because of copyright. So, here goes the wordy version, as well as an explanation of what it all means…

I’m talking about a Financial Times image of Germany’s long-suffering chancellor Angela Merkel talking to French president Emmanuel Macron by teleconference from back in May, when the EU first announced its bail-out measures.

Macron is sitting in some sort of palace. His background could not be more opulent. It’s all white panelling with gold outlines. There’s some sort of somethingth-century design painted on too, but that’s fading to prove it’s genuine.

Merkel is sitting in some sort of bunker or cellar that has been carpeted by the same people who installed my boiler. Her furniture appears to come from a budget store. There’s cabling hanging off the wall and lying on the floor. A stool or side table sits against the far wall, as if there’s nowhere else to store it.

Merkel takes up about a third of her screen, with nothing much of note around her. Macron looks tiny to emphasise the lavishness of his imposing surroundings. 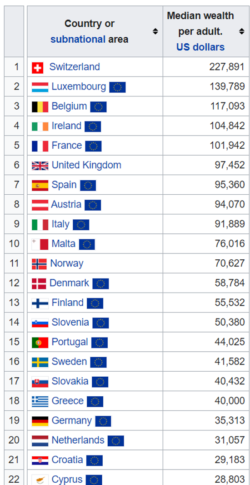 But guess who’s paying for the EU’s latest bailout extravaganza?

The Germans. Although it’ll be in a more roundabout way than usual.

The European Commission will borrow the money and then lend or grant it out based on how badly countries were hit by the coronavirus.

But net European Commission funding largely comes from Germany. So the new plan is just a new way for the Germans to borrow money without getting it for themselves, thanks to their better management skills in the pandemic…

But here’s the interesting bit. The table on your right from Credit Suisse’s Global Wealth Databook 2019 shows the visual anecdote about the French and German teleconference holds true. The median German household ranks well below the GIIPS countries on wealth. Despite an epic housing boom in Germany recently.

The Europeans are literally demanding that the less wealthy and more frugal nation bails out the wealthier spenders by borrowing money for them, via the European Commission. And they wonder why there’s resistance…

Of course, the reason the request leans on the Germans is simple. The only ones who can bail out Europe are the Germans.

The trouble with a bailout is that it would be imprudent if it isn’t accompanied by reforms in the countries being bailed out. And it requires Germany to borrow money for the benefit of others. We know where these two would lead – to a Europe still in need of bailouts, but which cannot be bailed out by Germany any more because Germany has borrowed too much too.

To understand how the absurdity of all this will play out, you need to be able to understand the German perception of what has happened so far. And, if you do, I think you’ll realise just how much trouble the EU is in.

In the early 2000s, Germany underwent precisely the reforms it now demands other European nations undergo, if they want German bailout money. Reforms that are an inherent part of being in a currency union.

If you have your own exchange rate, your currency can fall in value to make your economy competitive again. You don’t need to manage your economy properly if you just let the currency take the consequences.

But if you’re in a currency bloc and mismanage your economy, you face two choices. Cut prices – the dreaded deflation, which supposedly doesn’t work because of what Keynesians call “sticky wages”. Or you can implement reforms such as cutting pension benefits.

That’s what Germany did. And it didn’t like it, but it did it. (Britain chose option three and left the ERM, but that’s another story.)

Now that the rest of Europe is facing having to make the same reforms as Germany did, it seems they’re expecting Germany to pay the political price of enforcing them. The Greeks showed how this works. Elect a socialist and then he’ll implement the EU’s reforms while railing against them. It works, sort of.

By making bailouts conditional on reforms, the Germans seek to force sense on other nations – the same sense they went through. The European Stability Mechanism (ESM) was their way of doing this. To get an ESM bailout, countries have to hand over their fiscal reigns to the EU.

But the ESM’s policies are problematic outside of Germany, even if Germany implemented them in 2003. In other countries, it leads to riots and populist politicians being elected.

French President Macron, who has tried to turn around France’s fiscal fortunes, learned this the hard way. First it was the gilets jaunes. And he just lost his majority in parliament after seven MPs defected.

Merkel can’t hand over power to a successor even when she tries to.

The latest iteration of all this is being described by the media as Hamiltonian. That’s because the latest German bailout offer looks less conditional than those which came before. The Germans appear to be backing a European bond by allowing the European Commission to borrow the money. Even though this just transfers the cost to the net contributions to the EU, which Germany dominates.

Still, under the terms, as long as governments promise to spend the money on Covid-19 problems, they’ll get the money from the European Commission.

The Financial Times explains the terms and conditions by contrasting them to the ESM I explained above:

The ESM originated as a bailout fund offering relief to countries locked out of the bond market. In exchange, the fund requested strict monitoring on recipients — which many of them found humiliatingly intrusive — to ensure they complied with demanding policy conditions for loans. This made it toxic in many southern European countries.

The new Pandemic Crisis Support, in contrast, is tantamount to an unconditional loan. To apply, a country needs only confirm that it will spend the money — up to two per cent of its 2019 national income — on Covid-19-related costs.

Compliance with this minimal requirement will be checked within the European Commission’s run-of-the-mill observation of all EU governments’ public finances. There would be no “troika, [no] men in black”, as Spanish prime minister Pedro Sánchez put it this weekend, in reference to the trio — IMF, ECB and the commission — that tormented Greece during the eurozone debt crisis about a decade ago.

If you ask me, this is a compromise to prevent a debate. The Germans are giving in so that they have more political capital for the real battle to come.

Tall people will understand the nature of the problem. You face a choice. Only two of the following three can be under the warm bathwater at any point in time: your shoulders, knees and feet.

Pouring water into the end of the bathtub where your feet are sticking out doesn’t just raise the water level there. The water level rises equally, no matter where you pour it in.

It’s the same with money. If the Germans provide other nations with Covid-19 funding, that means those countries will just shift spending from Covid-19 related expenses elsewhere. You can’t ringfence the spending. It’s too fluid.

The Germans understand this very well. They are firing the first shot in the coming funding wars. It’s a shot designed to demonstrate the kindness and solidarity of the Germans, shortly before they make their demands on the bigger issues.

As GDP and debt spiral out of control in coming months, leaving Europe with an economic crisis instead of a pandemic, the EU’s Pandemic Crisis Support will become irrelevant.

And that’s when the crisis will begin.