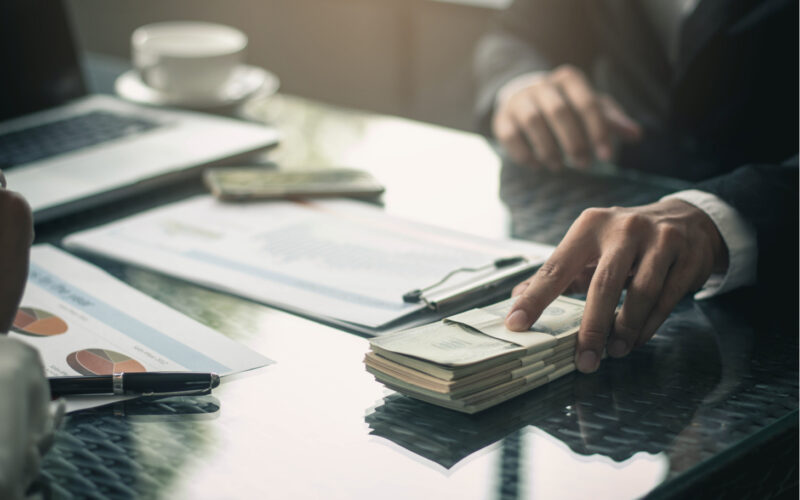 Do you remember what we warned you about, back when you first subscribed to Fortune & Freedom? It was in the second email you received from us. A warning to take something called counterparty risk seriously. Well, that warning has now played out in spectacular fashion in the stockmarket, captivating the world’s attention.

Just when the every-day investor had the city on the run to the tune of billions of pounds, their brokers simply shut them down. They abruptly stopped everyday people buying the stocks that were soaring.

How can a stockbroker simply reject or restrict retail investors’ orders in stocks? While the market continued to let hedge funds trade in those stocks?

But what the outrageous events did trigger is condemnation. It united the most bitterly opposed, including US politicians Ted Cruz and Alexandria Ocasio-Cortez. 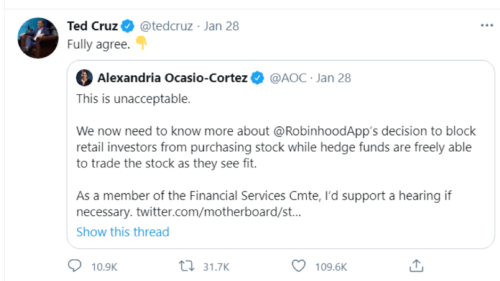 Just to get some idea of how these two usually get along, consider this response from AOC to the endorsement from Cruz:

But let’s not get into that spat.

As Nigel explained last Friday, the attack on short sellers by everyday investors traders is a form of populism. It’s going after those who were never held accountable for meltdowns in 2008.

The thing is, your stockbroker is part of the establishment. That’s what we need to learn from this saga. When you need them, when it really matters, they could just freeze you out of the system.

That’s precisely what we warned you about in the second Fortune & Freedom you’ll have received when you first signed up. We thought the message was so important that every new subscriber should see it as they come on board.

Who really controls your money?

How many people do you rely on, just to get your hands on your money?

Now, we live in the UK. We don’t really worry about any of those people failing to show up with our cash, right? We just trust they’ll do the right thing.

Of course, there are the occasional stumbles. Famous fund manager Neil Woodford’s invested in things that were hard to sell fast at good prices. So, when his investors wanted their money out of his fund… well, they won’t end up getting it all.

Then there was Northern Rock. Did you know that your bank deposits are classed as loans to the bank under the law? When you place your money in your bank account, it’s legally no longer yours, but the bank’s. The bank merely owes it to you, as a debt. A debt it could default on…

Regulations are in place so that the next time a systemically important bank in the UK fails, depositors’ money could be taken to fund the bailout. They call it a bail-in. This only applies to amounts over and above the amount of “protected deposits” – currently £85,000 for individuals and up to £1 million in some cases.

To be clear, it’s a remote possibility. And, even if it does happen, many guarantees and buffers are in place to protect depositors, including deposit insurance and protection for temporarily high balances. Not to mention depositors being amongst the last to see their claims taken by the bail-in. But the law is still there, on the books…

And what about the companies which cut their dividends during the Covid-19 crisis? And the interest you get… used to get… on your savings? And internet banking crashes? ATM outages? Pension cuts? Tax hikes? And claim-dodging insurance companies?

Hmmm. This is starting to add up a bit, isn’t it? Perhaps your money isn’t so safe in other people’s hands after all?

Perhaps it’s not even “yours” if you can’t get it back when you want it. And not without fees and commissions, taxes and delays.

My point today is that you need to start worrying about a type of risk which no financial adviser will mention. Outside of their small print, of course.

This simple risk is the first reason we at Fortune & Freedom believe you should take back control of your money.

What is this risk I’m talking about?

This isn’t jargon. It’s a simple term you need to understand to start on your journey to being the master of your own financial destiny.

So let me walk you through it…

In any transaction, your counterparties are the people on the other side of the transaction. The people you rely on to do their job. If you are buying or selling shares, for example, this includes the banks that your accounts are with, the payment processing company, the stock exchange, the company whose shares you’re buying and the seller of the shares.

Like I said, most people never consider the risk of being let down by any of these big institutions. When they buy shares, they don’t even consider the risk of their bank failing, the stock market being shut down, the company they’re buying engaging in accounting fraud, or whoever else may fail you.

But those risks are very real. Every now and then, banks fail, stock exchanges are frozen, accounting scandals are exposed and payment companies experience outages.

I think you need to keep this risk in mind. And I think it’s the leading reason why taking back control of your money is a good idea.

But how do you actually address any of this? I mean, short of becoming a hermit in a cave, it’s tough to avoid banks. And you can’t invest in shares without being exposed to the stock market as a counterparty.

But you can reduce it.

And I believe you can reduce it dramatically by following just a few simple rules that won’t take up much time. They’re the first steps in taking back control of your money.

The first is simple. Own some assets that don’t have counterparty risk. Meaning nobody can disappoint you in any way. You don’t rely on anyone else to get your hands on them.

The obvious one is cash. And I don’t mean in a bank account.

When Greece imposed ATM withdrawal limits in June 2015, cash suddenly became incredibly valuable. When I travelled through Greece in 2016, I spoke to people who told me about what life was like back then. One story stuck with me, not only because I heard many variations of it.

Mistrustful Greek grandmothers who remembered the bad old days of the drachma never fully trusted the new euro banking system either. They kept stashes of euro literally under their mattress. And their grandchildren laughed at their backwardness.

Until the cash withdrawal limits hit. Suddenly, Greek grandmothers were worth more than bitcoin.

There are a few other cash-shortage stories I could tell you. Like when I got stuck in an Australian desert and the internet cut out. The petrol station’s electronic payment systems stopped working. And I didn’t have enough cash to fill up the tank enough to make it to the next petrol station on the far side of the desert.

Eventually we discovered the cash stash my father-in-law had given my wife “for emergencies”. I haven’t heard the end of it since.

Or the time my mentor had to grab his own emergency cash stash to secure a bank cheque for me. It was the only way to pay a deposit on my rental property. My own bank didn’t provide such cheques.

The examples are instructive. I’ve learned my lesson, even if it took three reminders.

But what’s the principle at work here? Well, having a large stash of cash makes you counterparty risk-proof in the short term, at least. And that’s usually enough. Cash in your hand doesn’t rely on anyone else to do their bit. Having cash beats having to rely on your father-in-law in an emergency too.

There are other, similar assets without counterparty risk. Some provide decent investment returns, too. The key thing they have in common is the lack of a counterparty.

You own them directly, usually in your very hands. We’ll discuss a few of them in coming days, right here in Fortune & Freedom.

Lots of eggs, lots of baskets

Another rule to follow, if you want to minimise your counterparty risk, is diversification. And not the sort you’ll hear your financial adviser talk about.

Your share portfolio might have a number of different stocks to diversify the risk. That’s what stockbrokers mean when they say “diversification”. But what about the risk of that brokerage company or exchange being shut during a stock market crash or technical problem?

Instead of relying on the system working, I believe, you need to diversify your counterparties.

For example, having your stock brokerage account, pension, ISA, personal banking and mortgage all with the same bank could be dangerous. Your entire financial life could be frozen from the failure of a single firm.

Think about how you can avoid being overexposed to a single company in your financial life. It may be convenient to have all your eggs in one basket. But it also might be too much counterparty risk.

Here’s another example of how an awareness of counterparties could change your investing behaviour. Investing your money with a fund, instead of directly in companies’ shares, means you’re adding another counterparty. One more counterparty than necessary, who may or may not be doing the right thing.

By taking back control of your money, you can cut out such middlemen.

Not just their costs, but the risk of them failing you in some way.

That’s not to say middlemen are inherently a bad thing. In fact, I happen to believe they play an important role in making markets function. But they can add risk if you are over-reliant on any particular one of them.

Hopefully following some of these suggestions will make you sleep better at night.

That’s the real aim – peace of mind. If you don’t handle your money to improve the quality of life for you and your family… well, what’s the point in having any?

Being aware of the risks, taking care of them as best you can, that is an important step most people never take. But one that can have a transformative impact.

If you’d like to go on living your life as though counterparty risk didn’t exist, then my apologies for the interruption…

But if you’ve realised it’s time to take back control of your money, thinking about counterparty risk is the best place to start.

So, who do you rely on to get your hands on your money? 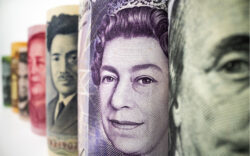 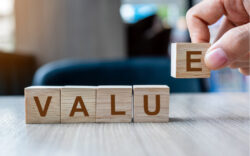 person Rob Marstrand
schedule 10 February 2021
When you go shopping, do you like to overpay? Or do you prefer a bargain? Let’s say you want to buy a new car. Would… 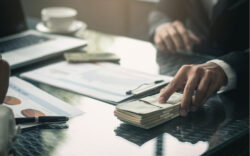 person Nick Hubble
schedule 8 February 2021
Do you remember what we warned you about, back when you first subscribed to Fortune & Freedom? It was in the second email you received… 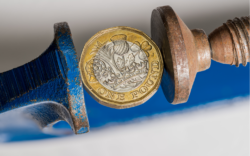