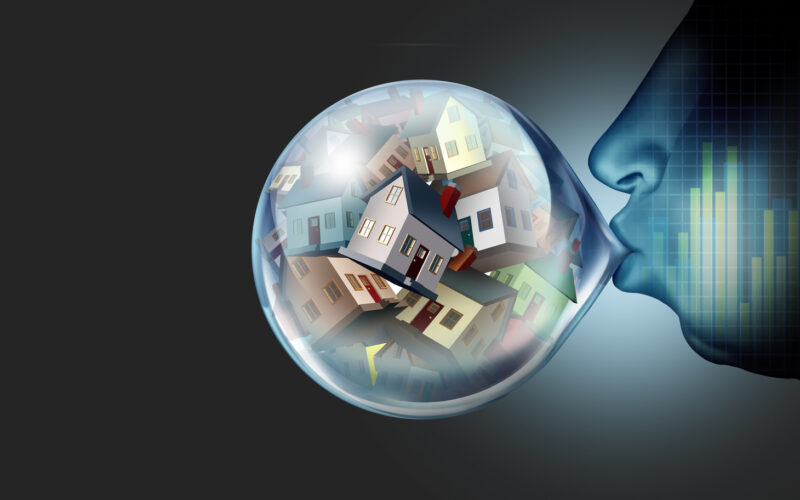 If you liked the tech bubble and the housing bubble, you’re going to hate the consumer price inflation bubble.

The effects can also be geographically uneven. Sometimes the housing bubble is in Spain and Ireland, like in 2005, and sometimes in Germany, like in 2018.

We call these bubbles “asset price inflation” to reflect that it is central bank-driven inflation which is flowing into sectors of the economy and bidding up prices there, not some sort of improvement which justifies higher stock or house prices. So it is inflation, but it’s not consumer prices which are rising: the action involves asset prices.

This is heresy to mainstream economics, by the way. In the central bankers’ world of so-called “money neutrality”, all prices are buoyed equally by inflation. After all, if money is devaluing, then money is devaluing against all things equally. It’s like pouring water into a bathtub – the level rises evenly.

But this ignores how money is devalued. And the disproportionate effects on different types of prices from that devaluation. Sure, if you pour water into the bathtub the water level rises equally. But your toes can still get burned while your shoulders are shivering.

Booming stocks, bonds and property have nothing to do with the central banks lowering interest rates and creating money. At least, it’s not their problem or responsibility. As long as the Consumer Price Index doesn’t reveal the extent to which money is being devalued, all is well in the inflationary world of the central bankers. That is the only inflation central bankers focus on.

To be clear, this is at least partially just an arbitrary statistical blunder. If house prices were included in measures of inflation, then suddenly central bankers would have to react to rising house prices by raising interest rates. And so, they’d rein in housing bubbles before they form a bubble, let alone crash.

But, because house prices aren’t included in the central bankers’ definition of inflation, housing bubbles can run out of control without central bankers worrying about them. The elephant in the room is invisible if you’re looking at an inventory that doesn’t have a category for elephants.

There’s another angle which amplifies the same problem.

Consumer prices are buffeted by all sorts of forces, not just inflation. If former isolationist economies like China suddenly come on to the world’s trading stage, just hypothetically speaking of course, it has a HUGE effect on consumer prices globally. In the case of the “Made in China” boom, our consumer prices should fall because the cost of manufacturing in China is cheap.

But, if central bankers try to offset this with inflationary policies, and succeed, those prices don’t fall. The important thing to notice is that inflation, like all things, must be measured against what would have happened, not against nothing happening.

In other words, if prices would have fallen 20% over the course of a decade, but central bank policy made them rise 20% instead, that means central bankers engineered inflationary effects of 40%.

That’s a huge impact – a lot of hot water which is about to burn your toes while you focus on your shivering shoulders – in terms of the bathtub analogy.

Of course, any newsreader will tell you that, over the course of the decade, the inflation was spot on target of around 2% per year, so there’s nothing to worry about. But the actual effects of the policy created a huge amount of inflationary pressure. It’s just that this was offset by deflationary forces, masking just how much inflationary pressure the central banks had to impose.

Why does this matter? Because, in trying to keep prices going up at 2%, regardless of what supply and demand is trying to do to prices, central bankers tend to ignore the large housing and other asset price bubbles which their inflationary pressure is creating.

To them, looking at the statistics, not much is happening as a result of their policies. And their policies aren’t having much effect. 2% inflation is plodding along just fine.

But, in trying to offset goods becoming cheaper, they are actually implementing massive booms and busts in asset prices.

This is the process whereby asset bubbles are formed, without central bankers realising it, let alone the fact that they are the cause of the bubbles. The way the data they focus on is measured does not alert them, and the way they measure their policies’ impacts does not account for the true size of that impact.

Let’s not focus on China’s role in this today, as important as it may be. Instead, let’s stick with central bankers.

You could say that what we’re experiencing now is a consumer price inflation bubble. That is because the effects of central bank intervention are impacting consumer prices as well this time, not just stocks, bonds and house prices.

So, you could see house prices go up 5% and the central bankers’ eyebrows will barely twitch. But if consumer prices were to surge that much, there’d be trouble.

Given that US inflation is already well above 5%, the trouble has already started too. But what is that trouble?

But, when consumer prices surge, then tighter monetary policy is supposed to follow. And then, suddenly, the bubbles which central bankers created in property, stocks and bonds look vulnerable to being popped.

Most asset price bubbles end in this way. Inflation in consumer prices eventually rises, requiring tighter monetary policy. But this tightening has a surprise effect on the asset price bubbles, triggering a crash. The central bankers are surprised by it, anyway. Because they denied the link between their policies and the inflation of the bubbles, they don’t realise that changing their policies risks bursting the bubbles.

What makes this situation so interesting is that the sizes of the bubbles in financial markets are so big and so systemically dangerous that it’s possible central bankers will decide to abandon their inflation targets in favour of keeping bubbles going instead.

This is especially so for the bubble in bond markets, where governments finance themselves. Without the government bond bubble, governments could get into financial trouble –  and that is something that no central banker wants.

Which do you think is looking more likely? Do you think central bankers will try to rein in inflation at the risk of popping the stock market, property market and bond market bubble?

Or do you think they’ll ignore their inflation mandate in favour of financial stability and keeping their Treasury mates funded?

Central bankers will try to rein in inflation vote